So with track made, laid and wired, and a couple of wagons to experiment with couplings (and set their height), it is time to start on the big Christmas pressie, the Lister RT locomotive.

Now my wife might not be that impressed with it, preferring the steam locos as produced by Paul Windle, and she has a point that it isn't the prettiest loco ever made! However to me these little industrials have bags of character. For starters the fact that it looks like a lawnmower, and far too small to be motorised! In fact a lawnmower isn't so different, Lister were making factory tugs like this, a useful tool in pre-forklift days, when some customers asked for a version to be put on rails and the Rail Truck variant came about in 1928. Ideal for lightly constructed lines they were popular for peat bogs and factories, and I think it would have been an ideal loco for a farm/estate railway. 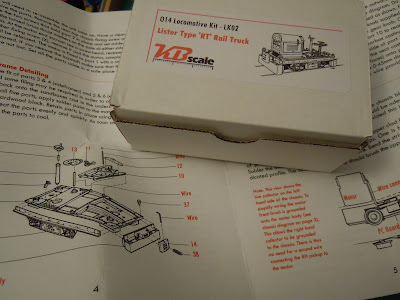 In the box are a good clear set of instructions, lots of black tissue paper containing shiny brass parts, an etch, bags of wire and other parts, and the ready-assembled milled brass chassis. More on the chassis later ... 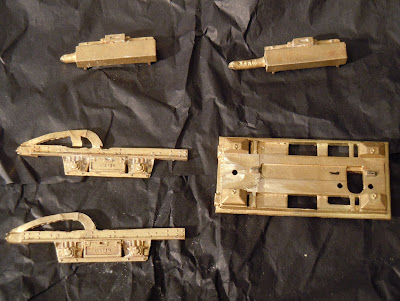 Most of the kit is made up from lost-wax brass castings. Here are the castings for the mainframes, buffer beams and ballast weights, and the footplate (upside down). As can be seen there is a considerable amount of metal to be removed from the casting process including those arches on the frames, which also show some slight mis-moulding along the top edge where they chamfer to fit the footplate. Nothing a spot of filler won't fix later, but the crisp detail of the cast parts is superb.
As a result I have spent a lot of time lately in the garage at the bottom of the garden hunched over a mini-drill with a cutting disk. The instructions suggest a piercing saw and a file, but I'm impatient! The frames and footplate required some serious fettling to get a good fit but it is worth the effort. A number of holes for details have had to be drilled out too, which is slow as brass is very hard! (well, I usually work with plastic or whitemetal!).
The biggest challenge so far has been opening out the ballast weights to make pockets to mount the couplings. Fortunately they are hollowed out at the rear, but there was still a large amount of metal to remove. I drilled two adjacent holes and opened them out to form an oblong, squaring out with a file, a slow job. 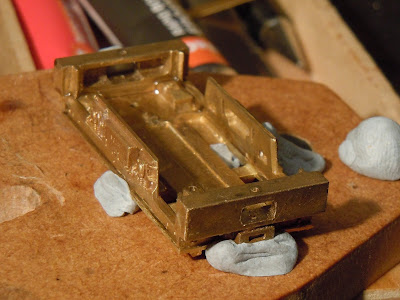 The instructions suggest using a mini blow-torch to solder the frames to the footplate but I don't have one, I'd burn myself if I did, and my 25W iron would never heat up this mass of metal sufficiently for a good soldered join. So I have used 5 minute epoxy ("Araldite" or in this case the B&Q equivalent!) which has the advantage of giving me enough time to adjust to ensure all is square. I assembled one side and end, then the others when hard, blu-tak is very handy here! In this photo the holes for the couplers can be seen, along with the vertical hole for a wire pin to secure them. 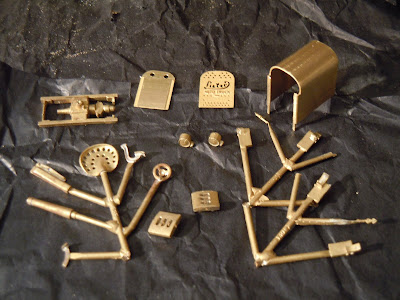 Here are some of the lost-wax cast details along with the etched parts used to make up the bonnet. Bending that bonnet piece took a while but I am pretty pleased with the result. More soon ...

Posted by Michael Campbell at 23:42

That is a nice looking kit. The epoxy is a good idea too - even with a gas torch getting enough heat into that mass of brass would be "interesting".

Ahh, factory tugs. Is that the correct term? Every day's a school day. I feel a Lister-fest coming. Good luck with the build of this looks fun.

No idea, Roy Link says they were built as "internal works transport". Good timing you posting that ... got any pics of the Rail version to go with it? Despite being to Amberley several times including the Lister gala a couple of years back, I don't seem to have any good photos!

Get a blow torch, they're great fun!

I appear to only have a single photo of a Lister on my Flickr account but it does at least demonstrate the driving position... http://www.flickr.com/photos/fairlightworks/2664171778/