Although for various reasons I was unable to start work on this project before Christmas, I did do some planning and thinking as to how I would build a layout in a box file. As you will have seen Christmas did bring lots of goodies, but before embarking on the loco and stock I thought it best to start by laying some track. The last few weeks have been quite productive, with the three points built, but for now back to the, erm, baseboard!
I decided against laying a board within the box file, as it would rob precious depth, potentially resulting in more difficulties with the buildings. I will be raising the ground level up to rail height anyway which should strengthen the bottom of the file, but the track is to be laid straight on the bottom, which like the lid and spine is made from stiff card. However the "front" and ends of the file are in fact 5mm chipboard.
First the rivets holding the sprung paper-clip were drilled out to remove it. Two openings were then cut into the left hand end of the box (one for the entry line, one for the low-relief workshop which will have a line run into it), by drilling big holes at the top corners and opening out with a power jigsaw. Another opening was made to allow access to switches at the front corner, and a hole drilled to take a 6-pin DIN socket, my standard power connection. 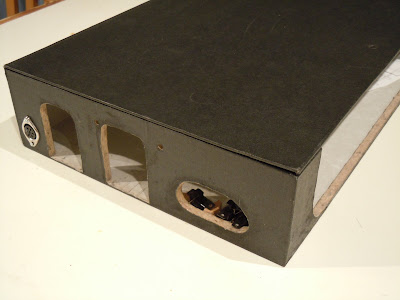 The rules specifically allow the front to be folded down to improve the view, which is a good idea as otherwise the view would be rather restricted to the "helicopter" position. However I thought removing the whole panel would weaken the box significantly, so I have cut away a large section with plenty at each end, and 5mm at the bottom, to maintain the strength. This section will be re-attached so that it hinges down. I have sealed the cut edges with a couple of coats of thinned PVA glue, and will paint them black for neatness in due course. 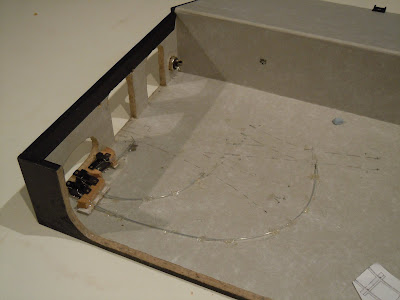 It will now be obvious why I could not have any part of the points protrude below the baseboard! Here the wire-in-tube that will operate them can be seen, snaking back to the miniature slide switches mounted to some offcuts of wood. The switches will be operated through the opening, and as well as switching the track power to the frog/vee of the point, their positive action will hold the point blades in position.

Posted by Michael Campbell at 23:43

'Proper prior planning prevent poor performance' as you well know!