Bank Holiday Monday, with kids and Grandparents, means of course a trip to the seaside. In our case it was Littlehampton, and perhaps unusually for a British Bank Holiday, the sun shone! Just behind the seafront in a park is the Littlehampton Miniture Railway, which was a great way of keeping my boy happy!
A quick Google search reveals that this is a 12 1/4 inch gauge line, 800 yards long, which originally opened in 1948 with two 4-6-4 steam locos. These days a rather unconvincing steam-outline diesel bogie loco is used (although the "whistle" was more convincing, I suspect a digital recording?). The train consisted of 2 open and 2 "closed" (well, open-sided) bogie coaches.

The line starts between a crazy-golf course and a cafe: 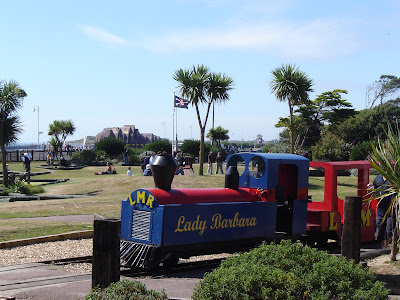 The station has a turntable at the end of the platform, used as the loco release. The station plan can be seen on Google Maps! 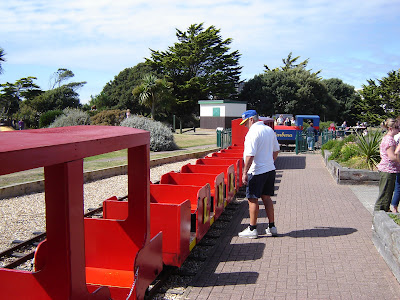 The line runs along the seafront road past a putting green, then through some trees and along the back of some houses as it runs past the leisure centre, finishing next to a boating lake. Again the station uses a turntable as the loco release. 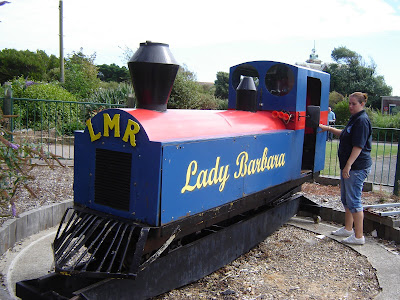 Also at this end of the line is the engine and carriage shed, note the third turntable - without connecton! The shed has been extended to the right to make a "tunnel" (the train is just passing into it). There are doors to both ends so I guess this is used to store the train when not in use. 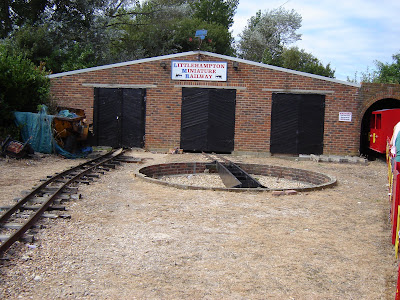 A line such as this is an interesting and different modelling proposition, as demonstrated by Colin Peake with his superb Shifting Sands model in "O9" (7mm scale, 9mm gauge). Steam power, and perhaps a more intensive service with two trains running would probably be necessary for operational interest! I would suggest a "U" shape layout with a station on each side, running from the seaside terminus through some trees to the boating lake. For a smaller layout, the "inland" terminus with the depot modelled in low-relief would work well, the "tunnel" making an ideal way to hide the exit. Hmm, maybe one day!

Posted by Michael Campbell at 22:08

They would probably lock the "tunnel" even if they didn't use it to store the train to stop people getting into it. They lock the tunnel at Eastleigh Lakeside Railway. The tunnel there does actually have earth over it, but the earth was obviously dumped there specifically to create the tunnel so it's still not a real tunnel!

Good point, and being at the back of a housing estate it is probably vulnerable to bored teenagers when no-one is about. But since only one road of the "shed" is actually connected with track, and looking on google maps (which coincidentally has the train pictured at both ends of the line!) I think the train + loco is longer than the building. So my guess is the coaches are left in the "tunnel" and the loco goes in the workshop/shed.