A couple of weeks back on a fine summer's evening the Sussex Downs 009 Society area group had a special gathering, in the garden of a cottage in a pretty village deep in Sussex. We'd been invited to see the garden railway of a friend of Nick, one of our members. However this was not your usual garden railway - no, not SM32, O or G gauge, this was proper 7 1/4 and 5 inch gauge ride-on live-steam!
You might be thinking this was some huge garden of a mansion, but no it was a normal size house with a modest (well, probably slightly bigger than average but we're not talking football pitches, more tennis court sized) garden. But into it had been squeezed an oval of dual-gauge track, a station with passing loop, a turntable leading into the garage (sorry, engine shed!?) and a full-size signal box! Yes this line was fully signalled, albeit the real signals were slightly out-of-scale! The photos give some idea of the character of this amazing little line. 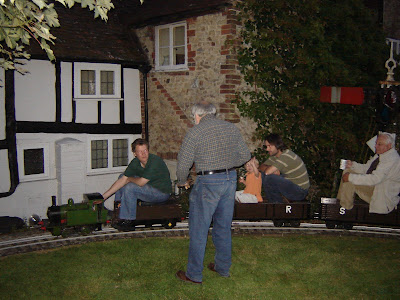 Here is the "MPD", with a steam loco being prepared, and a battery powered Hymek. As well as the dual-gauge track, the loco's were a mixture of standard and narrow-gauge outline. 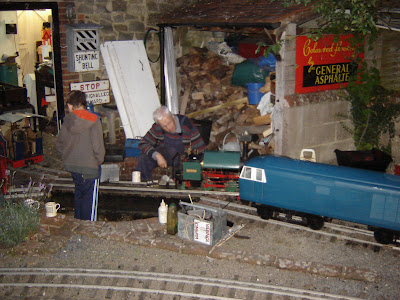 Further down the garden, just past the station platform, was the signal box. The owner of the line had built this himself, but the lever frame was a ground-frame from Lancing carriage works. It all works too, the real signals are connected to the levers although the furthest signals and the points are operated electrically. 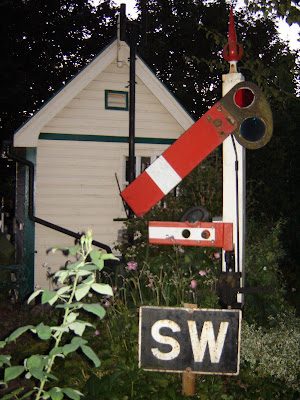 Nick on duty as the signal man inside the fully-equipped box, as a single line the trains have to carry the token of course! Later on Nick took control of one of the locos. 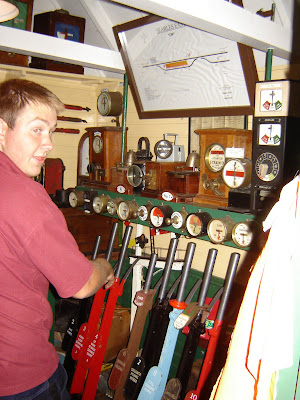 By the time Quito was ready to steam it was dark, all trains carried a tail lamp of course but those driving had to rely on those strap-on head torch thingies! So apologies for the quality of the photos. 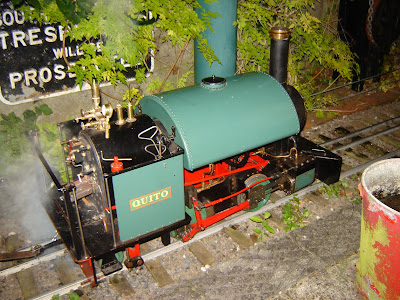 Finally, how do you fill up a miniture steam loco with water? With a miniture water crane of course! Here it is in use, just to prove it works, note the torch to see the water level in the tank (it was pretty black by then!). Not in the picture, there was even a miniture, working, fire-devil (a kind of stove with a tall chimney, put under the water crane to prevent it freezing in the winter). Despite this a large watering can was usually used to fill the tanks, it didn't rely on stopping the train in the right place! 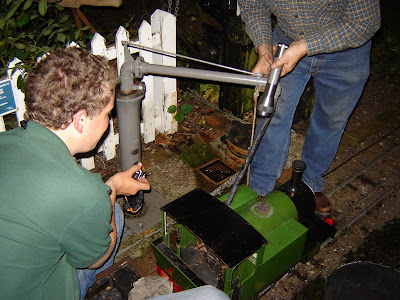 Posted by Michael Campbell at 22:18