The sub-title of this book on The East Kent Railway by John Scott-Morgan is The Line That Ran To Nowhere. That might explain why it is one of the lesser known Colonel Stephens lines, even though it possessed the key characteristics that give those railways such character - a eclectic collection of elderly locomotives and carriages, minimal station facilities and track layouts, and short trains with few passengers running through rather empty countryside. Indeed, the cover picture on the jacket of this hardback book beautifully captures that atmosphere. 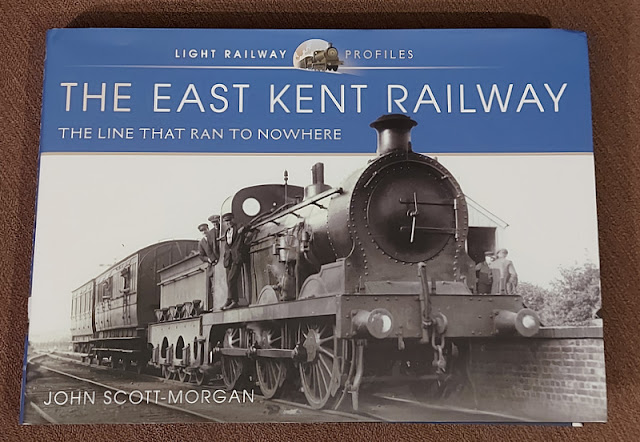 This begs the question of why the railway was built? Well, the book opens with a short description of the Kent coalfield which was the justification for the railway, yet in the end delivered relatively little. There is then a brief history of the railway, which is sufficient to give a good background and context to the book, and includes a useful map of the surprisingly convoluted route. The line evolved from Shepherdswell to meet the developing coal mines nearby in the run up to the Great War, and during that war had a very light extension to Richborough Port constructed. However, most of the mines had little output (and one never opened), so the area didn't develop, leaving the line with sparse passenger and goods traffic, but enough coal traffic to keep it going until nationalisation, and a section operating to serve the biggest mine until 1961. The book also describes the current preservation project operating that last section of the line today. 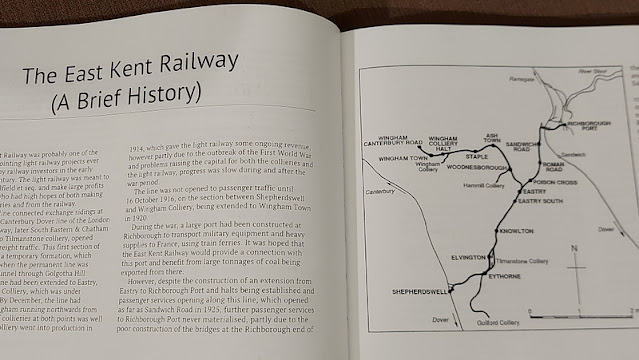 It will probably be obvious from the landscape format of the book that the focus is on photographs rather than text though, and indeed the majority of the 200 pages are dedicated to a photo each. This allows for well-sized and consistently good reproduction photos, each with a detailed and informative caption. In this way the story of the line and its locos and stock is provided. This makes a change from the typical book about a minor railway line, and there are no drawings or track plans, while the brief history does not contain details of the railway's construction or operation. However, the format works very well as an introduction to this lesser known line, and inspiration to modellers.

So, this isn't trying to be a definitive work on the history of this fascinating railway, but rather provide a good overview through well presented and informatively captioned pictures, and it does that very well. It's an easy book to read or just flick through, enjoying the photos and learning about the quaint and minimalist railway that once ran through a quiet corner of Kent.

Posted by Michael Campbell at 23:53