Obviously the sand surface needs to be painted if it is to look like anything other than sand. These are large areas, and the sand has a large surface area as well as being abrasive. I use cheap acrylic paints and a cheap, stiff paintbrush - the stuff sold for kids is fine for this job. Colours are mixed from white, black, red, green, and yellow - I can't say I find mixing colours easy and I usually end up with something too dark. Also a single colour sometimes looks too flat and plain, the aim is for a finish that is not too even which I attempt with multiple washes.

The platform got a coat of pale grey, this seems to have come out well and looks fine as well tended gravel so I left it at that. The road and car park behind got a darker coat which looked too even, so it was followed by a much thinner coat of mid brown to weather it and add shadows. However, this looked too dark, so another thinned coat of pale grey was added. The result is a mid grey that isn't too even as the thinner coats have had differing effects at different depths. 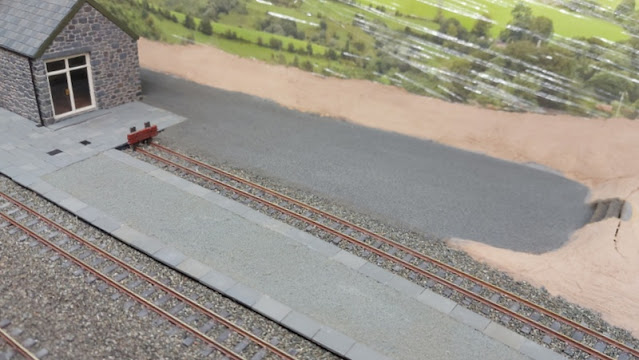 The yard at the front had a browner shade of grey to represent a gravel, followed by a very thin mid brown wash to add depth. Again, this ended up looking too dark, so I experimented. I dabbed talcum powder over the surface with a sponge, and then vacuumed it off while working it with a stiff paintbrush. The result has worked surprisingly well, giving a pale dusty gravel look which is patchy and varied in colour. 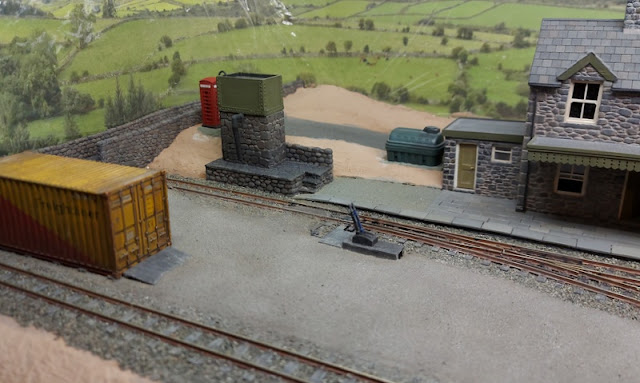 While the paints were out the mid brown was further diluted with added Isopropyl Alcohol (IPA) - giving a very runny wash. This was applied over all the track ballast, though perhaps more in some areas than others, which adds a slightly brown weathered look to the granite and because it collects in the gaps, adds some depth to the colour. 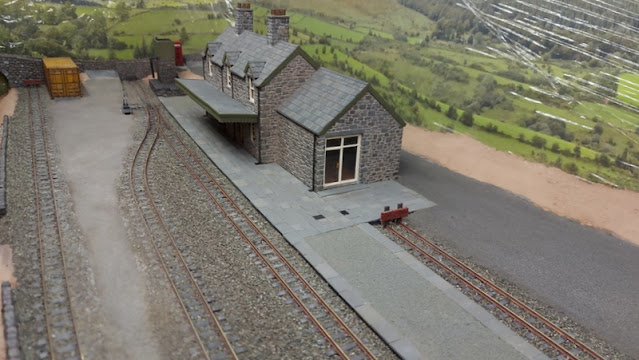 So there are three areas with three different finishes from the same basic materials - sand and paint. The front yard is dusty gravel, the platforms a neat even gravel, and the rear roadway and yard a rough tarmac. I've tried to blend them to the surrounding areas such as the public road and the ballast.
Right at the top of the station access road near the phone box the last coat of paint covered some talc overspill, which has accidentally given a very pleasing mottled look, I might use that technique on purpose in the future. 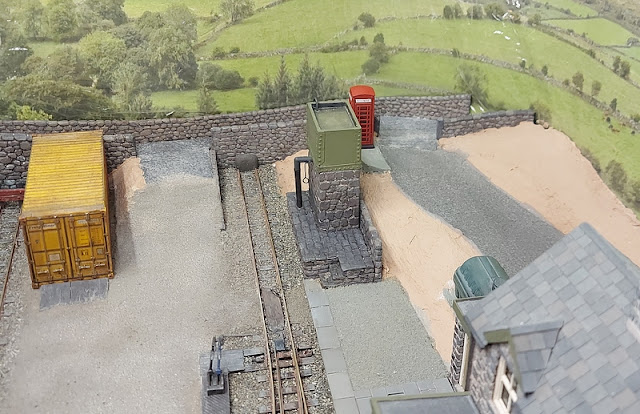 I'd also used a little sand to make pathways across and alongside the ballast, which were given similar paint treatment to represent a grey gravel. The walkways aren't really necessary, but gravel is easier to walk on than ballast and probably cheaper too, while I'm also using it to disguise the uncoupling magnet! 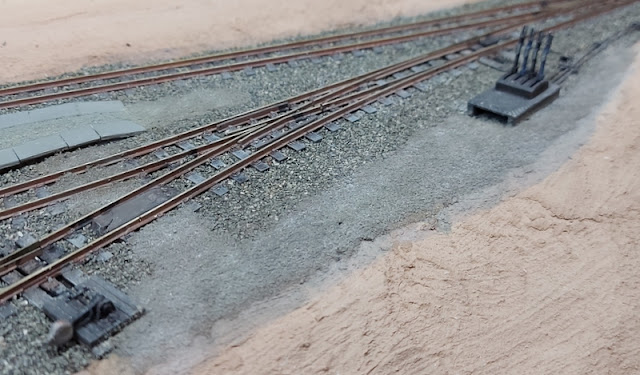 Posted by Michael Campbell at 22:50