Easter is about Resurrection and new life, so here is a story of bringing new life to old locos. A few weeks back a friend having a clear-out gave me a box containing a couple of non-working Minitrains Baldwins, and a pile of bits, suggesting I might be able to make a working model from the parts. In the box were two spare chassis (one broken), three spare motors (only one with a gear), a cut-about body, and other parts. 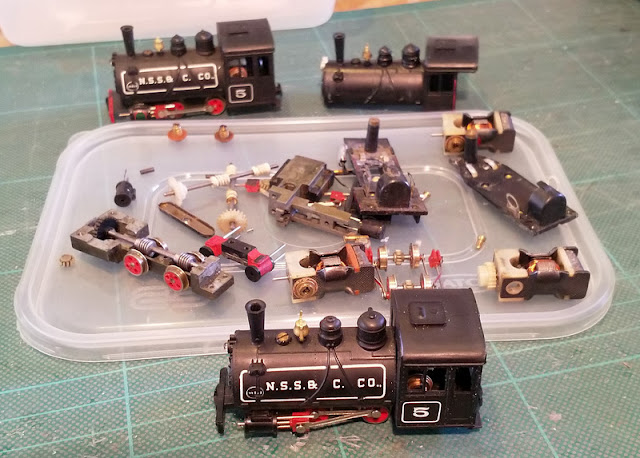 An initial test confirmed neither loco moved, though both buzzed. On dismantling the first loco I found the motor didn't turn freely, I'm not sure why, but I fitted one of the spares that seemed to work. The wheels and contacts were cleaned, gears cleaned and lightly lubricated along with the axles, and then it was reassembled. It ran, but very slowly. Replacing the motor bushes didn't help, so I chose another motor. Now it ran well - a little noisily, but reasonably slowly and well controlled, not bad for an ancient mechanism. That said the 5-pole motor and decent gearing should provide good slow running. Even the headlight worked. 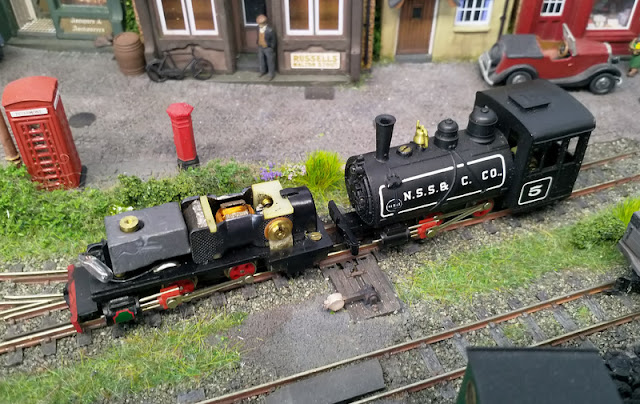 With one loco working I turned to the second. On dismantling it I found the chassis cracked through at the front axle, I think the plastic footplate was holding it together. I used one of the spare chassis to rebuild it, but crank-pins fell out and the wheels appeared to be out of quarter too. Quartering wheels isn't my strong point, and I've struggled with coupling rods and geared drive being out of sync before, but after some fiddling about I got it assembled so it seemed to turn freely enough. With the motor back in it ran, it's a bit more rough than the first loco and seems to stick occasionally - I'm not sure whether it is a pick-up issue or some binding, perhaps the quartering isn't quite right, but it may be OK on a continuous run. 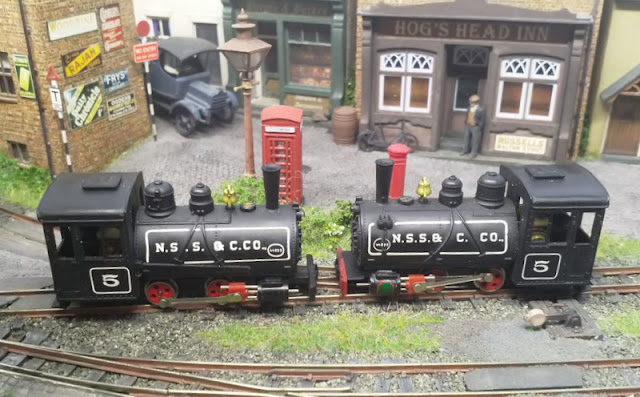 And to show how they work:


Apologies for the dodgy camera-work, I'm no good at holding the camera, driving the train, and switching the points all at the same time! The better running loco goes second by the way.

So a pair of Minitrains Baldwins brought back from the dead. They don't really look at home on Loctern Quay, they are more likely to join my Son's growing fleet serving Slugworth, he's keen to repaint one.
Posted by Michael Campbell at 22:52