I've just finished reading a book a little different from my usual - "Works Trams of the British Isles" by Peter Wallis. 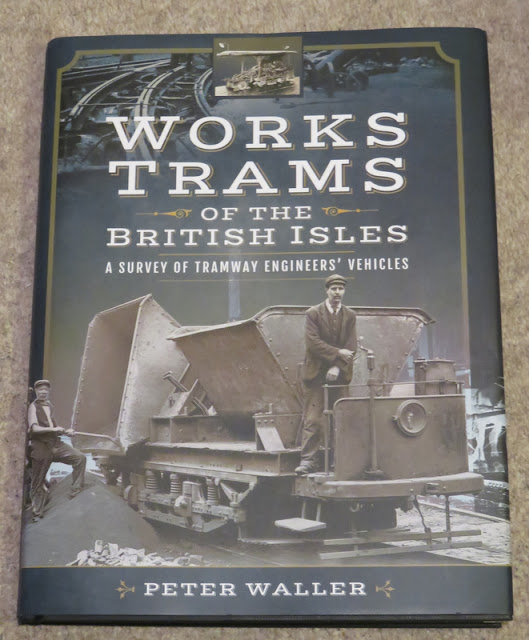 I'm not particularly a tramway enthusiast - well not the urban passenger-carrying type, usually electrically powered, that are featured in this book. While they are very nice, to me all the trams look the same after a while! But the sub-title "A survey of tramway engineer's vehicles" got me intrigued, I do like unusual and quirky rail vehicles, and this book is full of them. All sorts of tramway vehicles are included - stores vans, tower wagons, snow ploughs, open and tipper trucks, even a crane; and I was surprised at their variety and the number that are found in this substantial book. When I say "reading", it is really a picture book with detailed captions, so isn't heavy to read. The book is roughly divided into applications, although some of the vehicles had multiple uses so there is some overlap. The pictures are generally well reproduced and the book feels good quality.

As I am not a tramway enthusiast there were acronyms and terminology used which I was not familiar with, such as the initials of tramway companies. It would have been nice to see them expounded on first use, or a separate glossary. Also, most of the photos were undated, I'd have liked to see an indication of the year each was taken. However, they are minor quibbles, on the whole the captions were informative and surprisingly detailed.

This is a somewhat different book then, a bit of a niche, but of interest those who like unusual rail vehicles and not just tramway enthusiasts.
Posted by Michael Campbell at 13:42

I saw this was available and was looking out for one as it's right up my street. Thanks for the review!

Yes, I reckon you would find it interesting!