My daughter is mad about Harry Potter, so last week we went to the Harry Potter Warner Brothers studio tour. OK, so you are thinking, what has that got to do with model railways? Well, I found the way the sets and props were put together shared a lot with how we make models. For a start, the sets are largely made of plastic - fibreglass rather than styrene, with a wood and scaffolding frame - with great care for what is visible, and least possible effort into what is not. 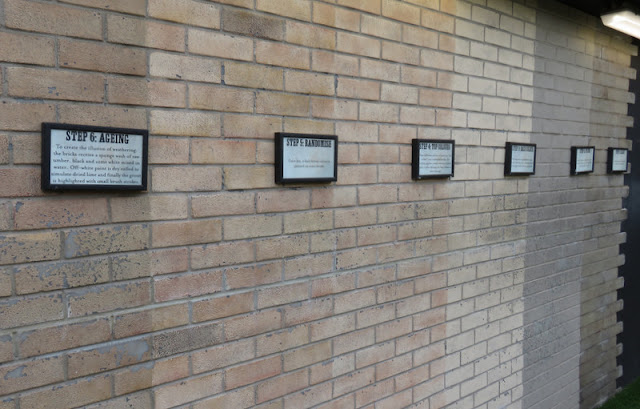 Round the back of Privet Drive is this example of how the brick wall is coloured; on the far right the plastic brick moulding is primed, then through various stages of painting (including mortar and "random" bricks), and finally "ageing" (or weathering, as we would call it) to the final effect. It is surprisingly realistic, even at close quarters. Similar techniques are used for interior sets too. Where appropriate the ageing is taken to extremes, to depict really old walls and even damage, some sets were reproduced in damaged form. 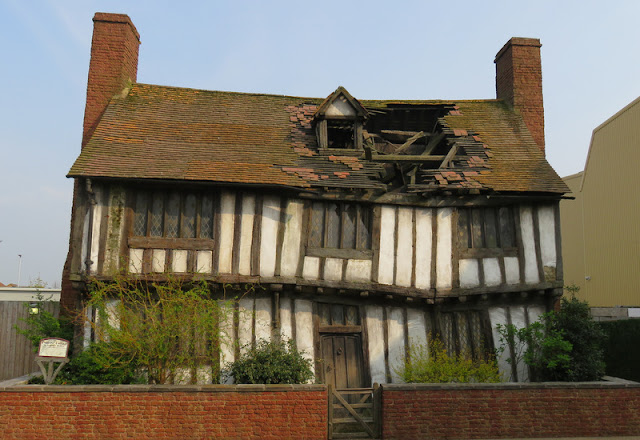 It isn't just buildings though, every prop and item of clothing is carefully selected or designed, and in a film like Harry Potter set in a fantasy world, pretty much everything seen by the cameras is designed and made. Thousands of goblets were cast (in rubber) to fill a vault; newspapers, posters, and packaging produced; and vehicles (like the famous triple-decker bus) constructed. The vehicles may need to be powered, while some props contain motors, servos, and electronics to perform for the cameras. 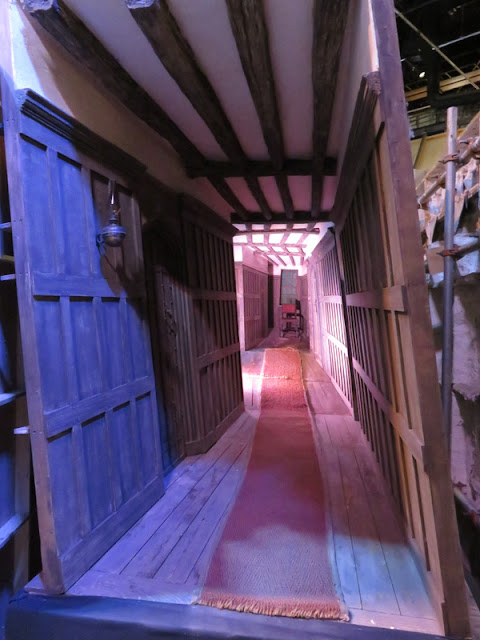 There are some clever tricks too, re-using sets for different rooms with re-dressing, removable walls to allow filming from different angles, and the use of perspective - the corridor shown above appears to be about 15 meters long, but was actually less than 5. 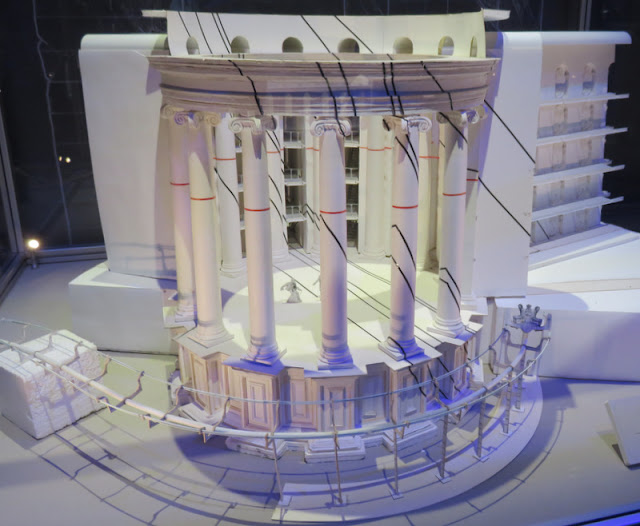 There were also some fine examples of genuine model-making, as the more complex sets are modelled in 3-dimensional form to understand how the scene will be filmed, and how the set will need to work. Often this appears to be simply printed card or foam-board, but many are quite complex, such as the model of Gringotts Bank above, complete with roller-coaster style railway to the vaults. 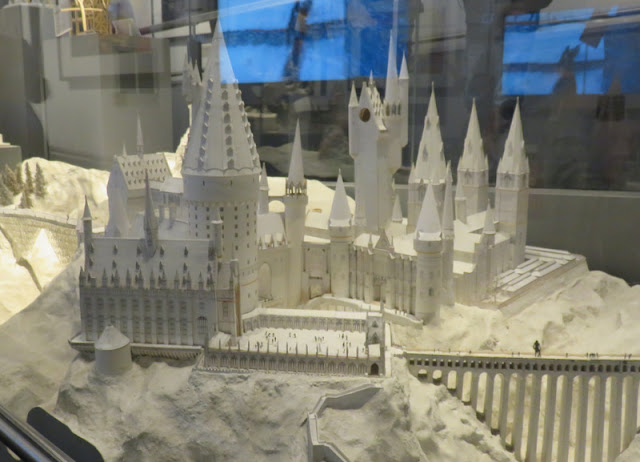 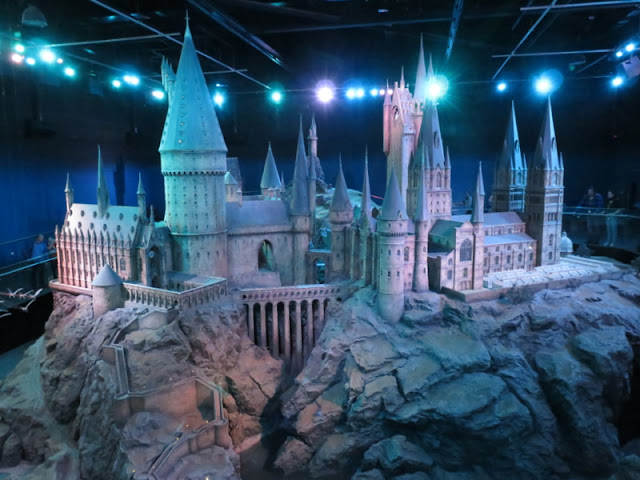 This model is 1:24 scale, which is quite a large scale; a small dolls-house scale or close to garden railway "G" scale, it's 1/2" to the foot and a figure would stand about 3 inches (9 cm) high. But Hogwarts is a huge castle, on a hill, with turrets and outer courtyards and walls - so it takes up a massive studio on it's own. My photos, hampered by the ever-changing "mood" lighting, don't really do it justice. 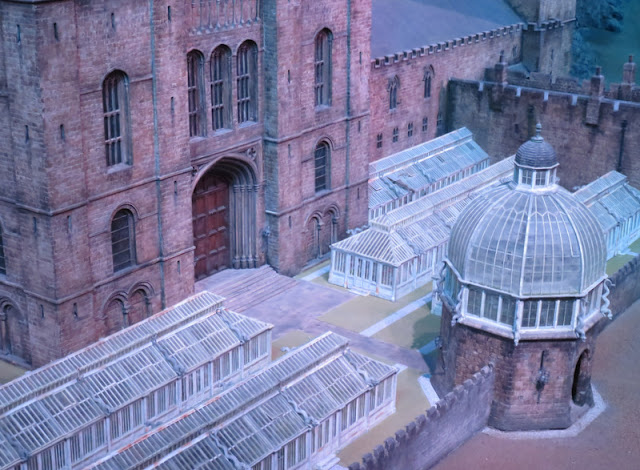 Despite the enormous size of the model the detail is really impressive. Just look at the glasshouses, the panelled door with the detailed stone archway, and the colouring and weathering of the stonework.

So as well as being fascinating to see how the movies were made, it was interesting to see common techniques between professional movie makers and amateur model makers, and maybe pick up a few ideas at the same time. No, I'm not building a model of Hogwarts, although I have already built a model of the Hogwarts express. Oh yes, of course, that was there too... 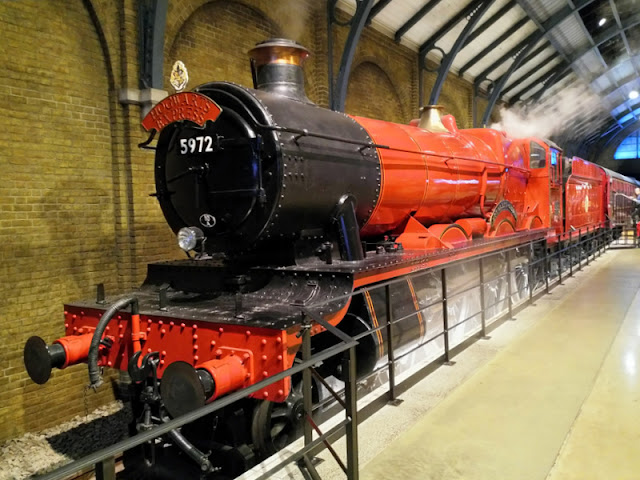 Railway enthusiasts may already know this is in fact GWR 4-6-0 "Olton Hall", built in 1937 and withdrawn in 1963. However it is now probably one of the most famous locomotives in the world, up there with the Rocket and the Flying Scotsman!
Posted by Michael Campbell at 23:25

That looks like an interesting day out with some useful inspiration. Not something I'd expect!