Progress with the NS2

I've been making irregular but steady progress with the Narrow Planet NS2 kit I got last Christmas. It's not a difficult kit at all, but I've been tackling it alongside (i.e. in gaps in) other projects. My first step was to blacken the etches, which helps paint to adhere later. I'm using some gun blue applied with a cotton bud. 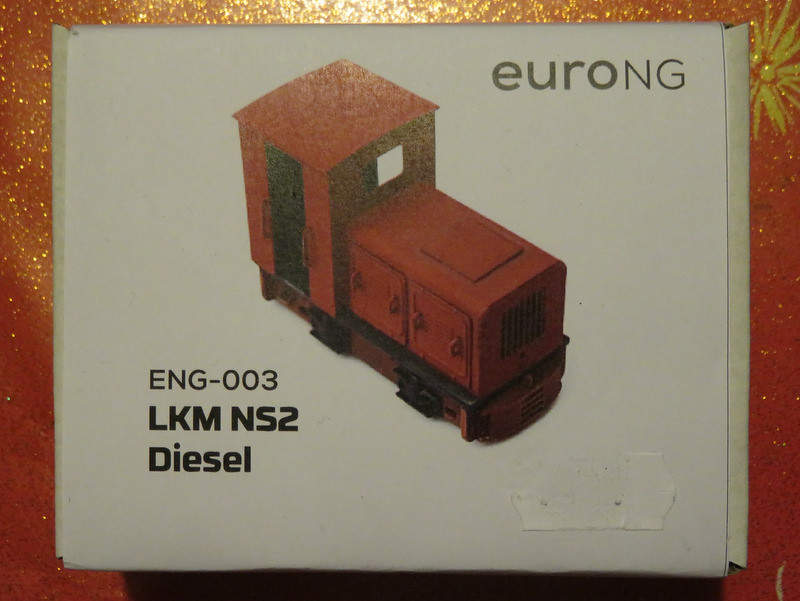 The etches were sprayed with an etch primer, while the 3D print was given a normal primer (both Halfords). The print was given a little attention with emery paper and home-made sanding sticks (emery paper glued around a coffee stirrer) between each of two or three coats of primer to ensure a good quality finish on the areas that would be visible (bonnet top and sides, and under-frame). Even though it's a top quality print a few minutes work between coats of paint is a worthwhile investment. 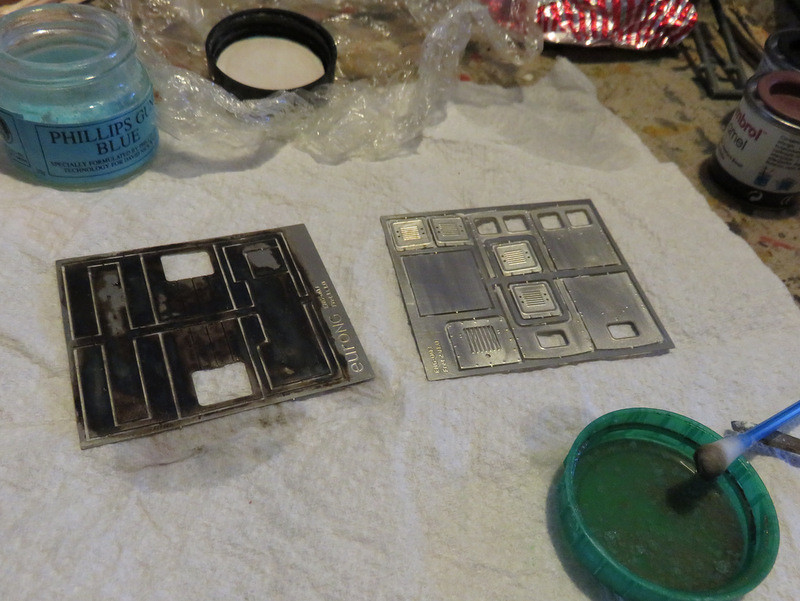 The etches were then assembled - here you can see their lighter shade shows the etch primer, compared to the slightly darker shade of the standard primer. They fit well but once again, to get a good finish I filled any gaps (you can see the green filler) and spent a little more time with the emery paper. 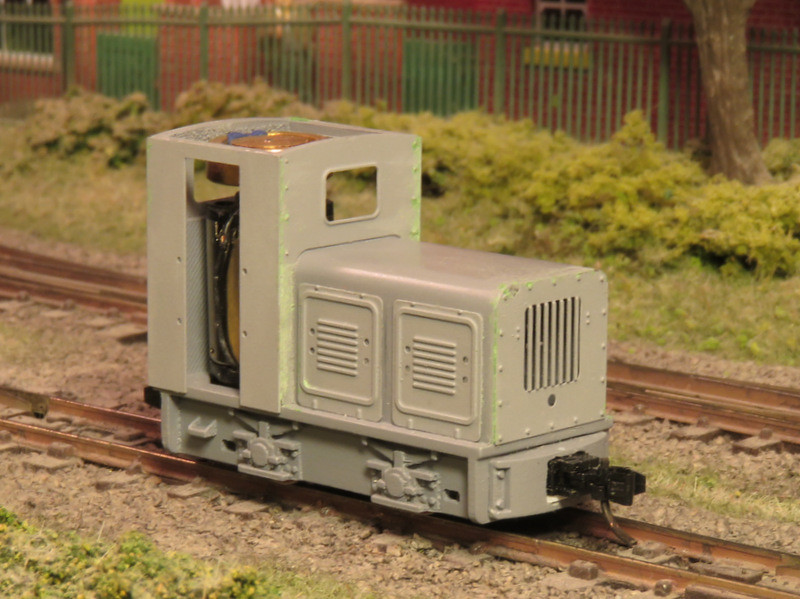 As usual the Microtrains couplers took some thought to mount, though the solution proved relatively easy. I drilled four holes in the coupler block at the corners of the slots, put a fine coping saw blade through a hole and cut out the square opening. A similar square opening was needed in the buffer beam behind, making space for the coupling draft box. After painting a wire pin will be passed through the buffer block and coupling to secure it in place. 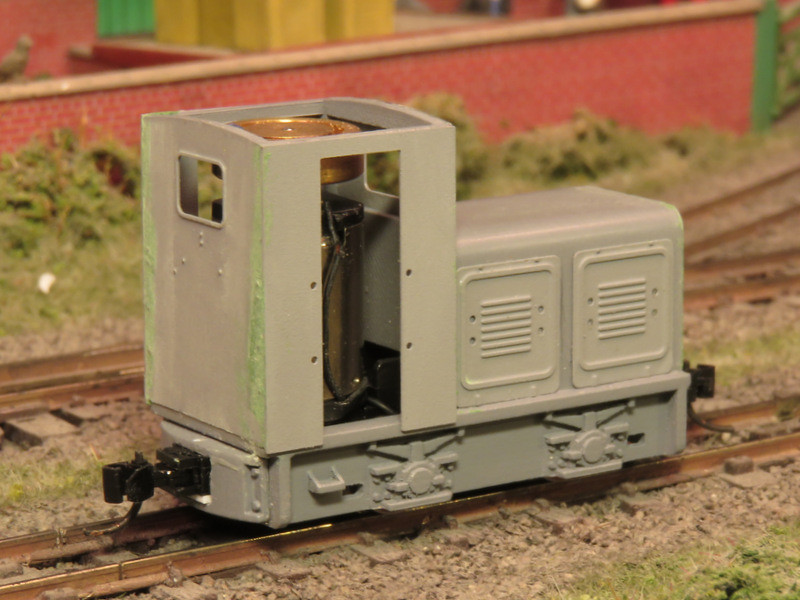 Handrails came next, and those bonnet panels needed a lot of handles! As the etches are laid over the print they needed drilling out too, with a fine bit in a pin vice. The 0.5mm wire was bent around the flat nose pliers, you may be able to see the mark I made where the width was correct to form the handle to a "U" shape. The strip of 20 thou plastic was used to space them equally from the sides while superglue was applied from inside. 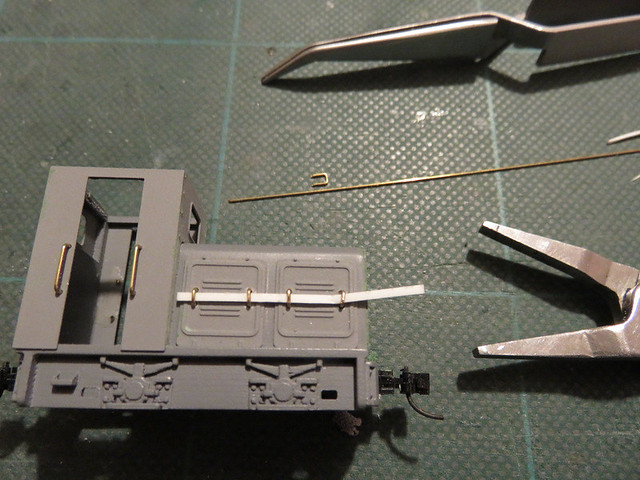 So it just needs the cab roof adding, then I expect another coat of primer before the top coat. I've not yet decided on a colour, though I'm quite tempted by red for a change, as on this NS2f, though the wasp-stripes may be a challenge! 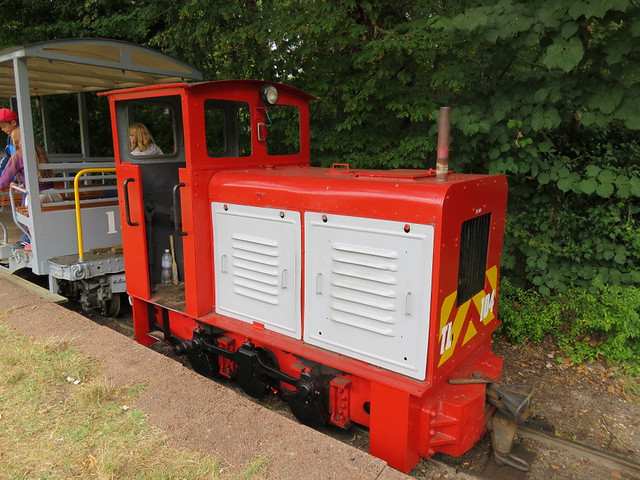