This weekend I managed to get to not one, but two local exhibitions. Better still the Sussex Downs 009 group were represented at both! Saturday was the Burgess Hill exhibition, where my friend Tim Sanderson was showing his layout, Elmgate. 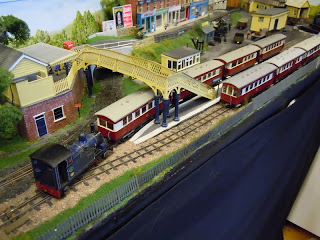 This show is very good for a local club show, with two halls of layouts across a range of scales and genres, and good trade support too - I was able to pick up a selection of materials including "wire in tube" for point control (I've got a half-used pack somewhere, but can I find it?!). It was good to see narrow gauge represented, as well as Thatcham there was Linden Street in O16.5 (by Charles Benedetto), a nice small-but-spacious station which I haven't seen before, and featuring this scratch-built Sentinel. 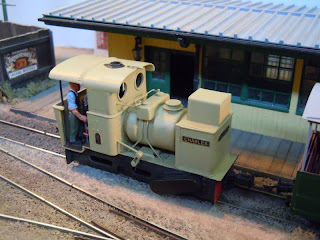 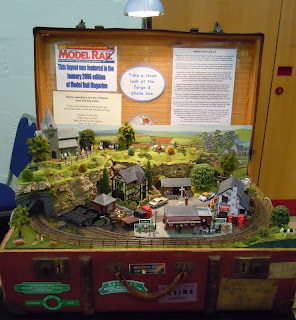 Today there was opportunity to pop into the much smaller show in Sompting. Although held in a rather "cosy" venue the organisers had packed in a good selection of layouts, from finescale 3mm scale to Continental N to Thomas for the kids to play with. No show guide though so no details of the layouts. From the Sussex Downs 009 group Mark Holland had his "Temark Valley" layout. 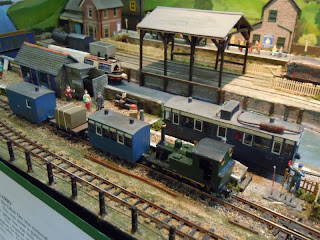 009 was also present (with 00) on Snailspeed, one of my favourite layouts ever but I've shown you photos before. I also really liked this 3mm scale, 14.2mm gauge layout of a Gypsum factory. 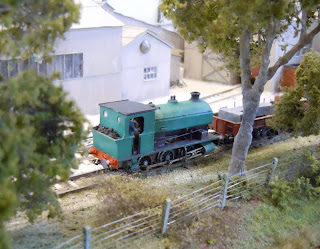 Two enjoyable shows, and if you want to see more photos click here for Burgess Hill and here for Sompting.
Posted by Michael Campbell at 18:38