Slow progress has been made recently preparing the Titanic for launch. The model is pretty much finished, as you can see. In this photo the lower part of the hull had been sprayed with Halfords red primer and then masked using "normal" masking tape from the same source. 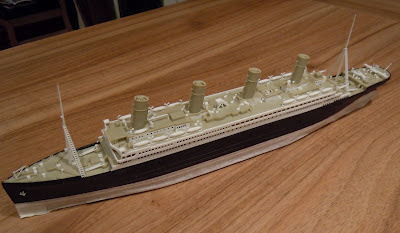 There was then a pause while I sourced black and white spray paint, B&Q do small cans of enamel but they were out of matt white. So in the end I brush-painted the white, which proved very fiddly and tedious, and required 2-3 coats. In the meantime I had found some Tamiya masking tape (from the Squires stand at Bognor last week), so used this for the white along the top of the hull. 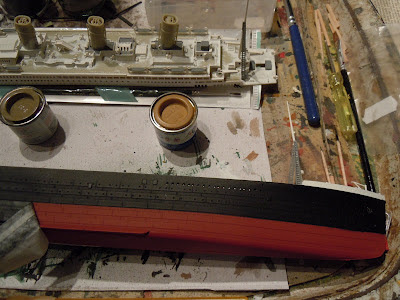 The result after a couple of coats of black is shown above, as the masking tape is peeled off the lower hull. The white-black border is crisp and clean, however there is some slight intrusion of the black over the red. Not really enough to worry me, but clearly the Tamiya tape is better, and with hindsight I should have stripped the masking from the lower hull and re-done it with the Tamiya tape!

Now on with the rest of the painting, which looks to be even more fiddly and tedious...

Posted by Michael Campbell at 22:26