Putting up the shed

The shed is progressing well, although for such a simple structure assembly has been quite fiddly. The sides have been chamfered where they fit together, recesses cut for the windows, a false ceiling (with access hole) and a plain back end have been cut, and the whole lot assembled. Strips of Wills brickwork have been added to the base of the walls for the plinth, again carefully chamfered at the corners, although since half of this will  be buried under floor or surrounding ground, I don't know why I bothered! 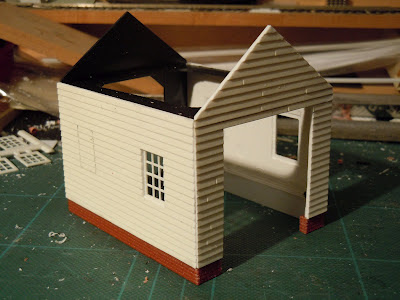 As seen in the last post the plain (inner) side of the rear side wall was scribed to represent the boarding, now the timber framework has been added from plastic strip. The window was added into the recess first, so the edges of the oversize frame are hidden (I didn't bother with the second window as it won't be seen). The brick sheet has also been doubled up to complete the plinth on the inside. 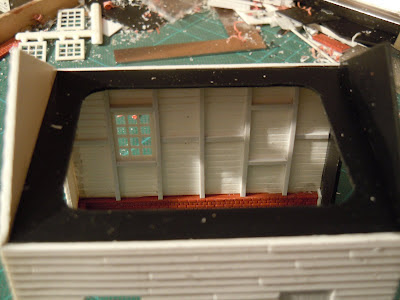 So here it is in place on the layout, which shows why I went to the trouble of finishing the inside of that wall - even once the (open) doors are in place it will be visible. Potential for interior detail in due course! Needless to say the inside of the front wall has not had the same treatment! The near front window will be fitted after painting, the far one has been boarded up - again, why bother if it won't be visible?

Posted by Michael Campbell at 23:07

Something weird has happened to your images - I'm getting a black no entry sign.

Is it fixed now?

Looks lovely, can't wait to see it in the flesh (in the plastic).