More from the wagon works

Modelling activity has been a little confusing of late, switching between 009 and 014. There is a batch of items being painted, 009 stock being checked over, and various small tasks on the boxfile. In between I have built a few more of the delightful KB Scale wagons.

The fuel bowser wagon and barrel carrying wagon set are superbly detailed, and while a little fiddly to assemble they will make an interesting change from skips and flat wagons. I actually have another pair of these to make up, but they will probably be bashed into something different again. 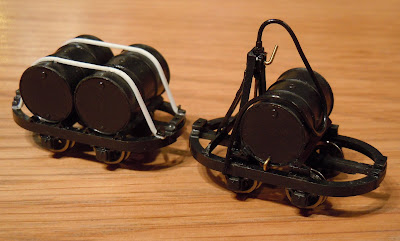 Talking of flat wagons, I've made up three more, except that a couple of them have gained ends made from plasticard and scored for planking to match the deck. This gives them a nice agricultural feel, and again ads variety. Another feature is the brake stand fitted to one of the wagons. One reason for choosing a farmyard setting was the variation in wagons and loads that can be justified, whereas industrial lines would usually exist for one traffic. Being a small layout Landswood Park will be more interesting - visually and operationally - with a selection of different wagons, than it would with identical skips. 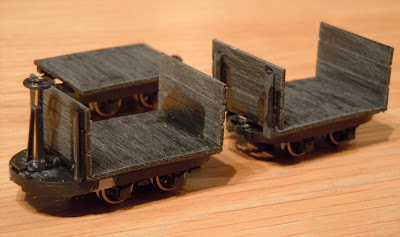 I've also added some lead under the framing and in the skips of the skip wagons, the flat wagons will have lead under the floor after painting. Which reminds me, I have a lot of wagons to paint now! They also all need couplings, although they are all ready to have them fitted, and I think I have enough couplings made up already too.

Posted by Michael Campbell at 23:58