The rules of the challenge allow a single cassette, described as a "Stick, to be attached to one end of the boxfile as a fiddle yard or headshunt, it can also be attached to multiple opeinings. Clearly my plan for Landswood required such a "stick" to make it runnable. I wanted to make a cassette that could be fitted to either of the tracks that leave the boxfile (although I doubt it will need to be connected to the shed/workshop line very often), and can be reversed - in order to allow wagons to be shunted to the workshop siding. 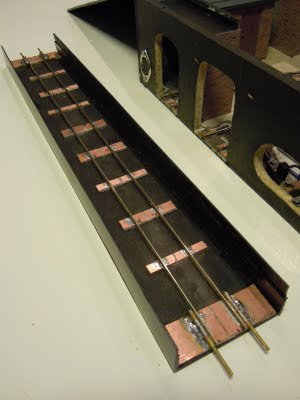 I made the cassette from plasticard, I could of use the trunking I used for Awngate but I didn't have any handy, and I only need a foot! To attach the cassette to the layout I used brass rod in brass tube. The rod is soldered into the tube on the cassette end, as it couldn't sick out of the boxfile! The cassette can slot into the layout with the brass tubes providing alignment and electrical conductivity in one easy move. 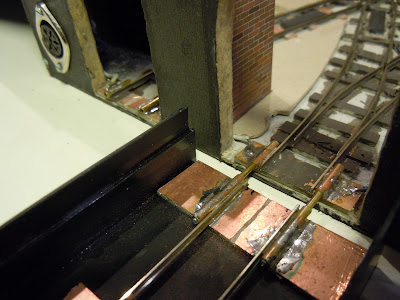 Now I can see you thinking, what stops the train falling out the end of the casstte? (If you weren't, I beat you to it!). So I added the gates in the picture below from L-section plastic, pivoted on a paperclip! They simply push up and down. 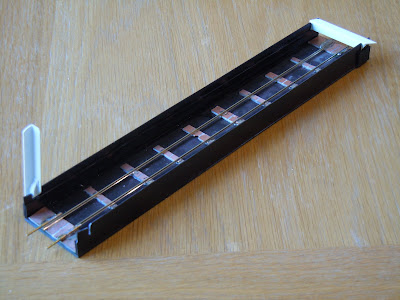 On the layout itself I have added uncoupling magnets. These are the Microtrains magnets, however as bought they are about 2" long, much longer than needed. So I break them in half to get twice as many for the money! I've also packed out the area surrounding the tracks with thick card. 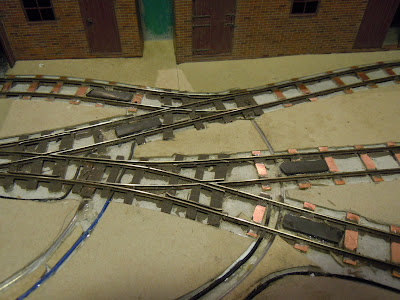 Posted by Michael Campbell at 21:32