Having assembled the frames to the footplate it is time to add the electrical pickups and assemble the chassis. The pickups are made from phosphor bronze wire, and on one side of the chassis block they are soldered directly to the block, thus making the whole loco live. The other side (shown) has the pickups soldered to a small piece of PCB (there is sellotape behind the pickups too, to prevent shorts).
This PCB has to be connected to the motor - which is mounted above the footplate - with a piece of fine wire. However that means un-soldering the wire from the motor every time the chassis is removed from the body, making lubrication and cleaning pickups a pain. My solution was to make a brass contact from the PCB on the chassis, which acts on another small PCB contact under the footplate, and that is connected to the motor. Thus electrical contacts between chassis and motor are made as the body is assembled, hopefully the photos make this clear. 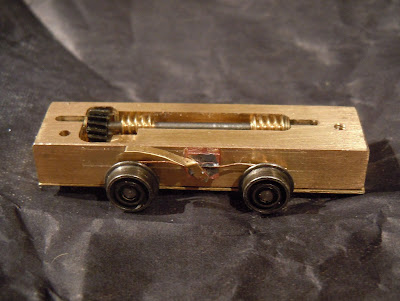 The underside of the footplate, the PCB contact and black wire to the motor can be seen at the top. The holes under the bufferbeam weights are to locate the microtrains couplers. The sand-pipes have been soldered into the sand boxes. 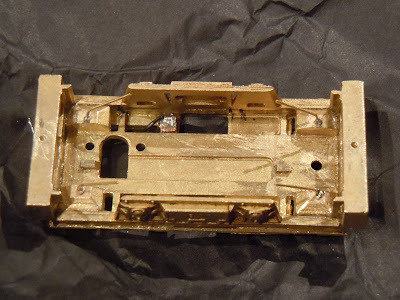 The chassis assembled, the motor will be hidden under the bonnet. The black wire on the near side goes through the footplate to the PCB contact seen above, the bare wire simply connects the motor to the body electrically. 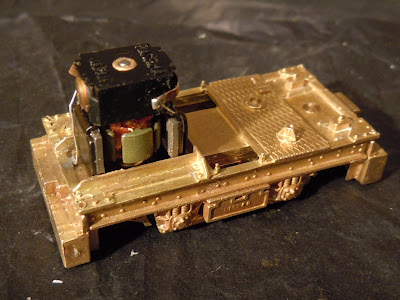 Initial running tests revealed a problem, there was a mechanical lurch every inch or so. This was probably a gear mesh issue, but I couldn't fix it. However David Janes at KBScale offered to take a look, and it has just returned working perfectly (that kind of service seems to be typical of Dave). It now runs very smoothly and very, very slowly. The gearing of this model is 196:1 via the double worm drive, meaning the motor is screaming away but the motion of the loco is realistically slow.
As well as posting a number of useful pictures, CF sent me this useful link, which includes a copy of the 1933 instruction book. Apparently the top speed of these locos was 5mph! I'm glad I only have a box file, anything larger and that speed could become tedious!

Ingenious. Probably overkill though as in my experience pick-ups don't need a lot of cleaning, if you look after the wheels, and lubrication is a once-in-a-blue-moon activity. Certainly not the chicking of a gallon of 3-in-1 over the who lot many modellers do. HAving said this, being able to dismantle the model should stop a lot of problems - just like having an unmrella with you makes the rain stay away !

What a cracking looking kit too.

Nice looking kit Michael... I've experimented with gear ratios from 36:1 up to 225:1, and found anything above 120:1 or so to be nearly useless for running purposes. Even for small petrol/diesel mechanicals. As you said, your layout is small, short distances mean it won't take forever to run across the layout at snail speeds!

I doubt it should need much attention once in service, but the pickup trick has been useful already as the loco must have been taken apart and reassembled a dozen times already!

Jeff you are right, the slow speed would drive you potty on a larger layout! Still, I guess with a max speed of 5mph it is prototypical!