Although I measured out for a double track, for now I am sticking with the basic oval and siding that comes with the Thomas set. After all, for now Thomas will be the only train! The point is I will be able to add an extra track, and more sidings, later on.

First I painted the track-bed grey with a couple of tester pots from the DIY store (allowing for future track). The track was stuck down with No More Nails (I thought it might be stronger than PVA but it didn't dry clear, PVA would have been better) and pinned, althoug the track pins were reluctant to go through the ply! At the board edges I used a short length of nickel-silver flexi-track, where the rails crossed the joint I put in brass screws both sides, and then soldered the rails to them, then cut the rails. This should make the track robust at the edge and ensure precise alignment, even though it is cosmetically lacking! Each rail then had a wire soldered to it, running over the hinge post to the rail on the other side, ensuring electrical continuity. The photos should make this clear. 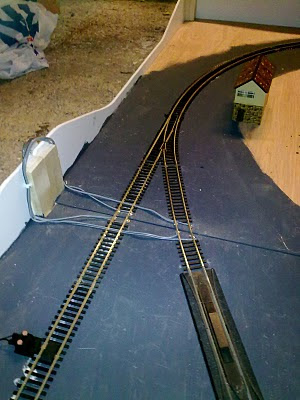 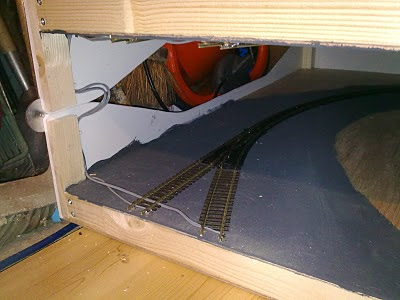 The Hornby controller was screwed to the board in one corner and connected up. In the siding I added a re-railer ramp with uncoupler, I'm surprised Hornby don't include these in the train set. I know they are not pretty but for a child they are very useful! A set of Hornby platforms were cut to fit the board joint and the length of the straight and stuck down with a glue gun. I used the small station building as although I have the larger one, it fouls the other end of the platform when the board is folded! I also found a signal box, this and the station came from my parent's loft ... Finally more tester-pots were used to paint the rest of the board a rather un-convincing grass green, I threw some handfuls of scatter onto the wet paint too. Frankly it hasn't worked that well but it is better than bare ply, and this is just a train set! It can all be spruced up over time. 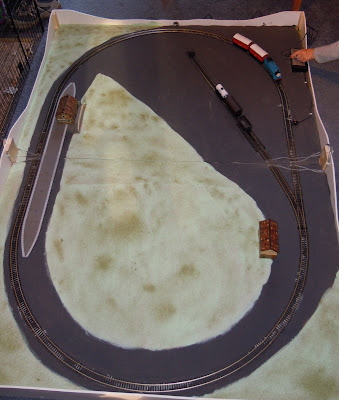 The real test came today, my Son's 4th Birthday. Even with lots of other presents including Playmobil (which needed a surprising amount of assembly!) and Firman Sam toys (which he is mad about), he was really excited when he opened the big parcel of the train set! Then I produced the board and he set to playing trains. In fact I have spent a significant part of the day kneeling on the floor playing with him - apparently I am the Fat Controller! Clearly it has been a big hit. 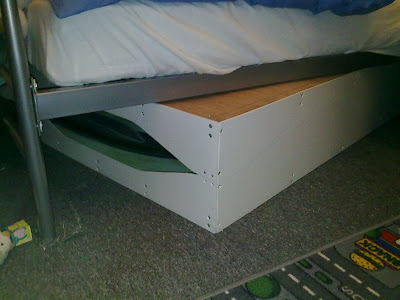 So does the board work? Well yes, although I really should get some handles to make moving it about easier. As you can see though - it does fit under the bed as intended! It is really easy to unfold and plug the controller in, so can be up and running in a couple of minutes, so mission accomplished!

Posted by Michael Campbell at 21:31

Ha ha! And lots for fun for boys of all ages!

Yeah - on our 'big railway' we used plywood - pre-drilled the sleepers and used steel pins. But since the density of the board does vary, quite a few bend!

We too painted the bare board - mostly a muddy brown earth colour but concentrated track areas were grey. Paint doesn't seem great at sticking scatter - diluted PVA does it much better - but I bet you knew that really!

I hope he has many happy hours of fun. Does a plonk on tunnel come next? And can you find one of those giraffes which bowed it's head to go through the bridge?

(Oh and good luck with the diet, 'Fat Controller'!)

That's a really excellent layout. I love the folding board and had been thinking about using those hinges for a "proper" railway.

It's not that I'm fat - honest! - But I rather like him calling me "Sir" like Thomas does on the telly (no I didn't tell him to!). I'd like to say he always has that much respect for Daddy, but no!

Yes a tunnel is a possibility for the future, as is improved grass, more scenery, roads, level crossing etc., but hey, this is a 4-year old's train set!

I'm not sure how well the hinges will hold up, I bought 4 but only had space to use 2. Still they seem to work fine at the moment!