On Saturday I took a run over to Uckfield, and the show was well worth the trip. The quality and variety of the layouts was excellent, the only downside was that on Saturday afternoon it was pretty busy, and some of the layouts were difficult to see, particularly with a toddler in tow. However there were steps in front of many of the layouts - strong wooden boxes (probably used to transport the barriers) with a handrail attached, a great idea for kids. I've also noticed that my little boy has different favourites to me, perhaps unsurprising! There I am admiring a small narrow-gauge or industrial layout, and he's tugging at my leg saying "I want to see big trains Daddy!"
Anyway, here's a sample of some of the layouts I managed to get (decent) pictures of, you can see more here. The trade support was also very good with some specialists there, I picked up some details for Awngate from Dart Castings.

Here is the Hellingly Hospital Railway by Phil Parker, you may be aware of his Blog, it was nice to put a face to him! Actually the concept of a Hospital Railway has caught my imagination recently, Railway Modeller this month features another layout based on this concept. I have some OO stock for a light railway layout that didn't get finished, it could fit a micro-layout based around a hospital ... ? 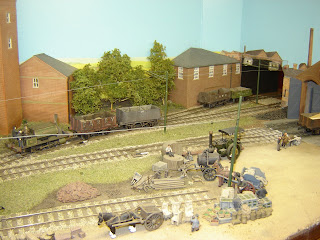 Portchullin in P4 by Mark Tatlow was a superb Scottish layout set in the 1970's, both of us were happy to watch the trains go by for a while on this one. It did seem to be suffering an attack of the gremlins though, after the second derailment I was cheeky enough to suggest they may have been better off in OO! 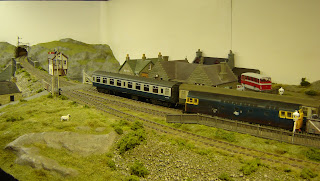 I admired Cornwallis Yard when I saw it in Railway Modeller a while back, so it was nice to see it in the flesh. 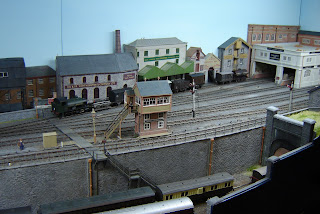 Purbeck, by John Thorne, I have seen before but it is a super layout and it was good to see it again, especially having recently visited the area that was the inspiration for this layout. As always there was quite a crowd around it! 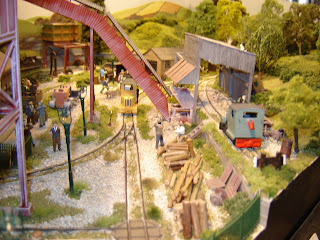 Thanks for the kind words. I spotted the mention on Google blog reader this morning - your blog is part of my regular diet !

The show went really well. Uckfield always put on a top quality exhibition and we've enjoyed the last two visits. If anyone reading this hasn't been, check the club website and put it in your diary.

I too thought the Scottish would have not been any the worse for being 00. Woderful modelling, but indiferent running. I'm still to be persuded to enter the P4 club. I'll dabble in EM, but for reliability then the good old 16.5 wins.

Must have just missed you, I was there on Saturday with some mates too.

Good to see Rivendell again, but as you've said Porthcullin was disappointing for something I've admired on RMweb for a while. 00 has it's advantages ;)

It was fairly busy on Saturday afternoon (it was probably more so in the morning!). I'd have stayed longer but 2-year-olds have short attention spans! Still, it is important to educate him!

Porthcullin was a superb model scenically with nicely detailed stock, but prone to derailments. I confess I can't see the point of P4, I can't tell the difference to EM, and since most layouts are viewed side-on, finescale OO can look just as good! Still, each to their own.

Hi Michael, may I make a request? I'm in the process of compiling the show's retrospective on the Club's website and I would like to possibly use a couple of your photographs. Could you get back to me if this is ok - credit will be given.

Adrian - that's fine, if you can find any that are good enough!

Many thanks. The retrospective has now been published on the Uckfield MRC's website: