EXPO-NG is probably the biggest narrow gauge show of the year, so like many NG modellers I had been looking forward to it for some time. As usual there was a great selection of top quality layouts, but also excellent trade support. It could be just me but it seemed a little quieter than last year, but the crowds were deep enough in places!
For once I didn't have a toddler in tow, so I was able to take my time, get some reasonable pictures, and talk to the exhibitors. It was also good to catch up with people and put some faces to names. I did get to browse the trade stalls too, as well as picking up various odds and ends I have a new project for the workbench, of which more later! However here is a taster of some of the layouts, you can see more photos here. 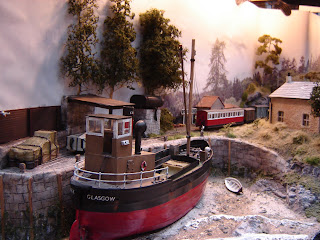 Dunbracken by Tom Dauben is a small Scottish harbour scene built on an ironing board in 009. This was my fist chance to see this layout having followed it's construction on various forums, and I have to say it looks superb. It just shows what can be done in a small space to a high standard, and I gather he now has some more show invites.

The Oro Grande Railroad in the unusual scale of 1/64th, 14.2mm gauge, is a US outline quarry superbly modelled with (and indeed around) a working excavator by William Loyd. 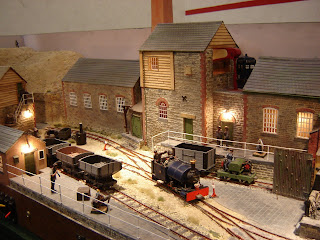 The Blackwood Valley Railway by P J Saunders was another layout I'd seen on the internet so was good to see in the flesh, a characterful O-16.5 depiction of a Shropshire lead mine line. 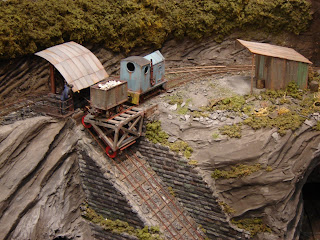 Regular readers might find this familiar, as I saw Cwmorgoth Copper Mining Co at the Worthing MRS exhibition recently. However it has gained a lighting rig, and so that and the lack of a toddler to hold meant I could get some decent photos (without flash) that better capture the feel of this O-16.5 layout by Jean-Luc Pineau.

Posted by Michael Campbell at 21:45

Tom was getting invites to Paris with the layout when I was there. Ou invite to the Chailey bash seemed a bit lame after that.

BTW. Garn doesn't appear to be updating in your sidebar. Wonder why?

Paris might be more glamorous, but I'll bet Chailey is more fun!

Yes, Paris is glamorous, but my GCSE French failed me BADLY when they were asking me about the show... rather embarrassing really.

Chailey was another one of my invites too. Look forward to seeing you there if all goes to plan!

I wasn't sure what else was going, but glad there will be some more 009 there.

Congratulations on the Reinier Hendriksen trophy Tom, well deserved! And you'd better get a phrase book :-)