Slow progress the last week or so, but with the buildings completed the focus has shifted back to the layout, preparing the ground levels ready for scenery. 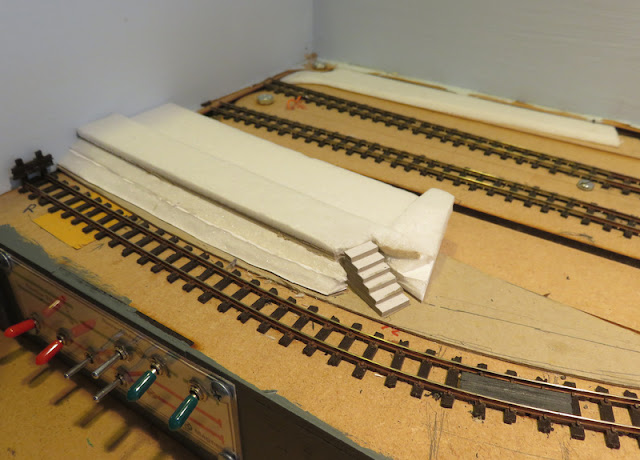 At the left hand end, the terrace will be raised slightly on a base made of foam-core board, thick card, and a foam pizza base. The steps are cut from 2mm card. There will be walls alongside the steps and supporting a path, but these will be fitted after scenery. 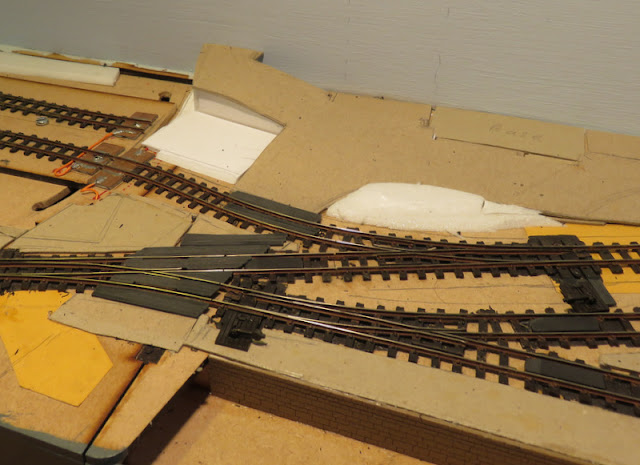 The roadway was cut from card a little while back, but is now stuck in pace on packing and formers to raise it up, and a small bank fitted in front of it from pizza base foam. Level crossing timbers are cut from black plasticard but (as can be seen from the one out of place) not yet stuck down. This is a daft place for a crossing, the points, many angles, curves and check-rails made it tricky to fit the plastic, but it does help scenically and using paper templates helped. Using black plastic means any bits missed in painting, or caught when track cleaning, are not obvious - although the plastic is set below rail level.  Point levers are also being fitted to extended timbers made from plastic. 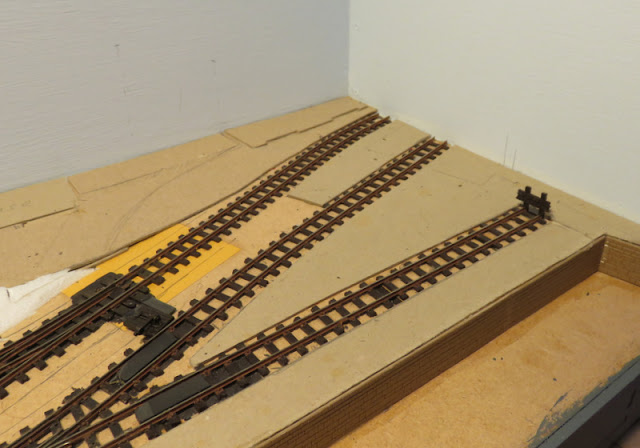 At the right-hand end the quayside has had 2mm card fitted around the tracks to bring the level up to the sleeper tops, in readiness for the clay that will form the surface. I've also fitted a buffer stop. 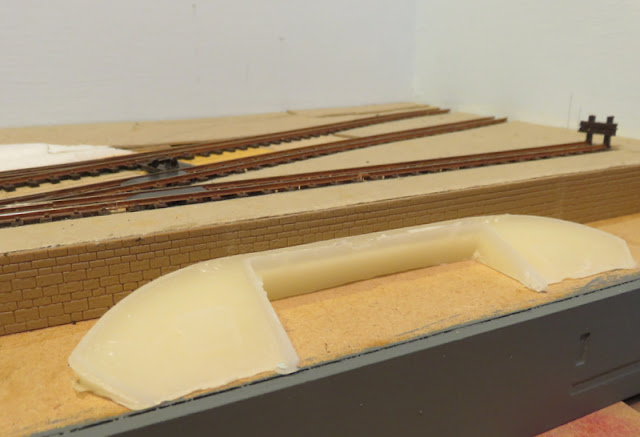 You might have spotted the quayside itself has gained a stone face. I could have gone for brick but wasn't sure how printed paper would survive whatever I end up using for water, and didn't want to use embossed brick as it might contrast too much with the buildings. Also, it's not unusual to see riverside walls built from stone even in areas of predominantly brick buildings, so I thought it would be a nice contrast. After some discussion on the NGRM forum of the best stone to use I chose Wills dressed stonework, which I think fits well. To match the courses the three pieces were each cut from the bottom of separate sheets.

I've also got a partially sunken barge resin moulding from Anyscale models, which I think sets the location as a riverside quay which has fallen out of use. It needs cleaning up and painting but will I think add a little interest at the front. I will have to figure out how I'm doing the water soon...
Posted by Michael Campbell at 22:33