The Hudswell Clarke has been awaiting a paint job for some time, it was last seen having coats of primer and gaps filled. So it seemed a good time to try out my airbrush. So the "spray booth" (cardboard box) was set up and the compressor connected up. Some green paint was diluted with thinners to a milky consistency, transferred to the airbrush cup with a pipette, and off I went. 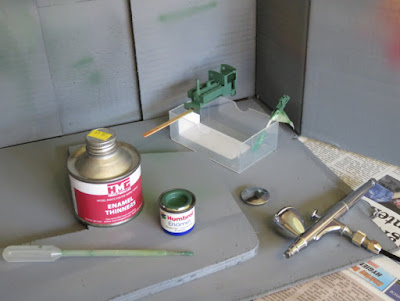 I have to confess it isn't as easy as it sounds in George Dent's book (though that has been very useful). I had a few problems with the airbrush clogging up, perhaps I need a strainer as George suggests though I was careful mixing. It took a while to get used to the action of the trigger, and to get paint flowing without getting too much. I also struggled with corners finding paint built up on the edge of the side that was at 90 degrees to the side I was spraying. However, after rubbing down with fine wet-and-dry paper, and four attempts at spraying, I was happy enough with the result - though I'm not sure I couldn't have got as good a finish using a brush with less hassle! 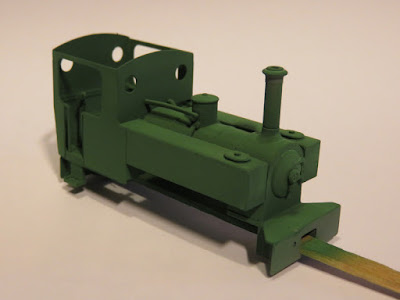 You might notice here the "handle" consisting of a coffee stirrer passed through the coupling pockets and held with the coupling retaining screws. It makes it easy to spray and detail paint the loco without touching it.

At this point I got a bit doubtful of the colour I'd picked. I don't have many greens in my collection so I think this is the same as I've used for coaches in the past, but it seemed to look rather pale and bright (though appears darker in this photo). However I've pressed on, hoping the black parts and the weathering will tone it down...
Posted by Michael Campbell at 13:16

Although I've only sprayed a couple of test pieces with my airbrush so far, I've given up on mixing paints for now. I just can't get it to work without clogging up. Instead I've switched to playing around with the Model Air range of paints from Valejo. As the name suggests these are pre-thinned for airbrushing and they seem really easy to spray.

I agree with Mark, i too use the Vallejo Model air range, but you can get humbrol to think well you just need airbursh thinner or RO distilled water. I think the paint pot style airbrush works better if mixing paints as oppose to the cup at the top.

I have a few Vallejo paints and they do work well, but a handful of basic colours isn't very flexible. They're pricey and generally only available in packs of limited colours so building up a varied selection is difficult and expensive. I have loads of Humbrol enamels, and I like enamels (the detailing is in enamel paints too) - so it makes a lot of sense to use them!

I did wonder if you'd prefer enamels anyway. I agree finding the Model Air paints can be a bit of a pain. I bought one selection box full of greens and earth colours (it was some form of camouflage collection), but you can get quite a lot of the range via amazon, although they are add-on items so you have to be buying something else as well.