Finally I have got around to uploading the pictures of the Box-file layouts from the David Brewer Memorial Challenge at Expo. There were 11 entrants that made it to the show, a good turnout, and as always a variety of different ideas and scales. Most of them were finished too, which in itself is a challenge as it is easy to forget how much work is involved even in a layout as small as this! You can see pictures of all 11 here, but here are some of my favourites. 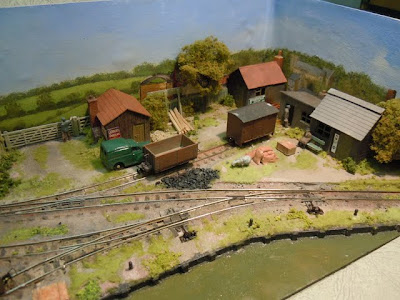 Eastlight (009) by Samual Eveleigh was awared a runner up prize, and I can see why as the scene is very convincing. Samual just 13 years old, but the quality of this model shows he has real skill and I'm sure he'll be producing superb "proper" layouts soon ...! He was also making a loco from tinplate, and making a good job of it. 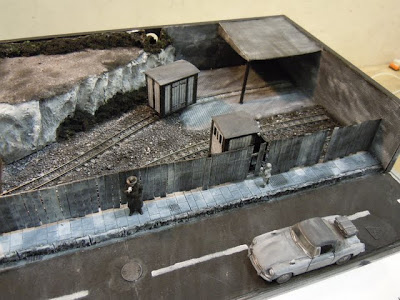 Schrödinger's Cat (09) by Matt Wildsmith, also awarded a runner up prize. The name is a reference to a philosophical question, but being an Engineer I didn't get the point of the question! However I do see the point Matt was aiming for with the colouring, after all most pictures of old railways are in black and white aren't they? (yes, this is a COLOUR photograph!). The effect is better in the photograph than in reality, but it is very cleverly done. 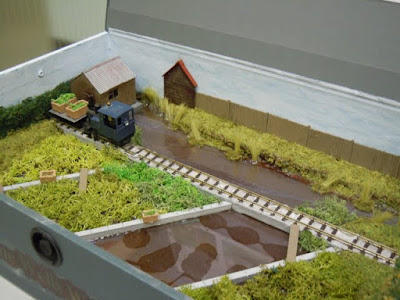 Nine Wells Watercress Line (009) by Daniel Figg. Another young entrant, demonstrating the value of these sorts of competitions to encourage newcomers and youngsters into the hobby. Purists may scoff but the limitation of a container or size means that anyone can have a go, without the need for large budget, space, or time investment, and results (hopefully) in encouraging the builder on to greater things. Anyway, back to this model, the location and purpose of this line was obvious to anyone who has seen photos of the narrow gauge lines serving the watercress beds in Dorset, and that is an achievement in such a small space. A more suitable (small i/c) loco would have been nice, but they are very challenging in 009, even for an experienced modeller. The track plan is not the most exciting, but Daniel had it running on a shuttle module, I guess that saved him from going insane! 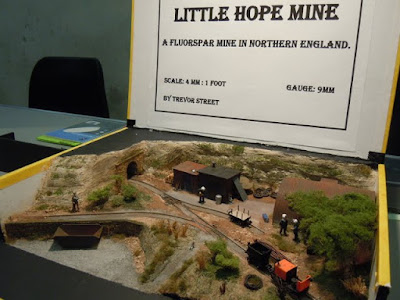 Little Hope Mine (009) by Trevor Street was nicely modelled and presented. Portraying a small mine working it is quite convincing, as small operations did indeed look as simple as this. I like the use of different levels to the scenery, and the spacious feel that demonstrates how much more the same space is worth in 4mm/ft against my own model in 7mm/ft! 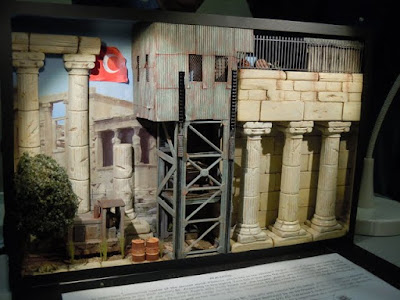 Temple of Pfalocos (09) by Christopher Dack. Inspired by a photo of tracks used for moving stone blocks for the restoration of the Acropolis in Athens, this is another old ruin being restored with the help of a narrow gauge line. The idea was that a wagon would ascend and descend in the lift, with a loco to collect it at the bottom and a man pushing at the top. Sadly the lift refused to work smoothly! Still I love the concept and it was nicely finished, this being one of two models that used the box file in the vertical orientation.

I hope all the other entrants had as much fun building their box file layouts as I did building Landswood Park. And if that has got you thinking about building a small layout of your own, the challenge for next year has been announced on the EXPONG website, which will be for "pizza" layouts (circles) of up to 60cm diameter. If you decide to go for it, all the best - but I won't be doing another challenge. Have I said that before? Twice? Oh well...!
Posted by Michael Campbell at 23:12

A really impressive selection. Do you think that forcing people to use a standard box made them more imaginative ? I suspect that when space and money aren't an issue, a certain "sameiness" starts to happen with people all wanting to build a bit of Wales.

To be fair choosing Wales as a setting for a narrow gauge layout is less popular than it used to be!

Yes I think fixing some parameters of the layout (like the size!), and the fact it is a competition, forces people to think more imaginatively about what to put in it. It needs to be memorable and interesting, leading to the adoption of working features and unusual settings. Also I think the best ones focus on a theme and do it well, rather than trying to fit in too much - which is impossible anyway.