I did spend some time in the model railway exhibition, mostly in the hall normally used to display the narrow gauge locos (they were all out in the sunshine), but also in a couple of the other railway-related buildings. 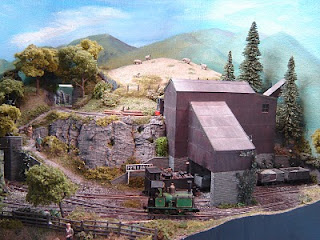 I got there in time to help Rob set up Peny-Y-Bryn Quarry, his first time of taking a layout to an exhibition. He has been sprucing up some of the scenery (still suffering from the damage inflicted by the mice) with some ivy on the granite loader, plus more ballast. Actually he'd got a bit carried away with that, and we had to remove some with a screwdriver where loco flanges were lifting wheels from the track! Still we got it working, including the top level controlled by a shuttle unit.
Also on the Sussex Downs stand (representing the 009 society) we had the display case, with the oval of track we display with it, and Tim had a new project building a layout in an old stereo cabinet. Mind you, much of the day you'd have been lucky to find one of us there, such were the attractions outside! I did spend a couple of sessions operating Pen-Y-Bryn though, and cursing the short sidings where the uncoupling magnet was always in the way, and the granite chippings going everywhere while loading the trucks. Especially with a 3-year-old "helping" me with that bit!! Still since I built the layout I couldn't complain.
I did get round the rest of the exhibition too, albeit as usual having a toddler in tow isn't the easiest way to see layouts, especially when he was so excited by the real trains outside! There were some good layouts on show, representing narrow-gauge lines of course, and I picked up some interesting (and obscure) books from one of the traders too. 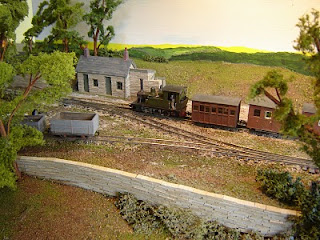 I was really pleased to see Garn by Chris Ford at last, a superbly executed and wonderfully simple layout. Loads of character and yet such a small layout. OK Awngate might have more operating potential for a similar size, but in many ways Garn shows less is more ... 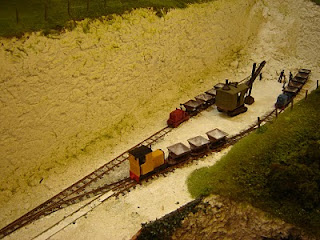 "The Chalk Pit" by Nigel Lawton is a great model of ... well, take a guess. Of course it is also a superb showcase of his own range of tiny internal combustion locos and skip wagons - remember this is 009! Real watch-maker stuff. 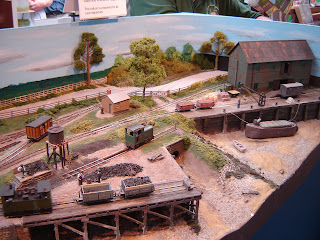 Pagham Harbour is one of my all-time favourite layouts, another case of less-is-more producing loads of character. This is the latest version, a complete rebuild on a larger board, although with the extra wharf it is slightly more crowded, but no doubt more interesting to operate too. It has lost none of the character though!
You can see more of my pictures of the exhibition and the gala here. As always I get home and wish I had taken more, but I was too busy enjoying the show!

Posted by Michael Campbell at 22:52