I took my little boy along to the Brighton Modelworld show today. This show covers all sorts of modelling, from Lego to Model Engineering, dolls houses to radio control racing cars, boats to planes, and even robots. It is a show firmly aimed at the family, but judging by the good range of trade support, it is well supported by enthusiasts too. However, to be honest, from a model railway point of view, many smaller shows are far better! There were some excellent layouts, but to my mind too few, and much of the rest of the show was similar to last year. That said it is good to look at the skills of modellers of other subjects, and the radio control tanks are fun, plus the show is very interactive - we had a ride on a real steam train (see below!) and made a model aeroplane from polystyrene. Like I said, it is aimed at the family, and my son loved it! 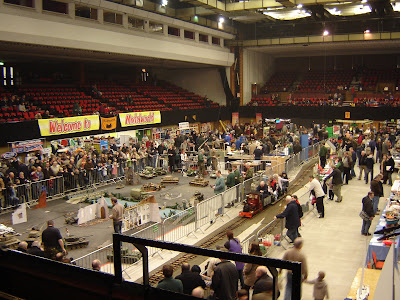 On the model railway front I thought the best layouts were Overlord, the well-known model of a dockside in the midst of D-day preparation, and County Gate, possibly the most impressive 009 layout currently on the exhibition circuit. Now I must apologise for the poor standard of photo's, as ever photographing models is difficult whilst holding onto a 3-year-old! 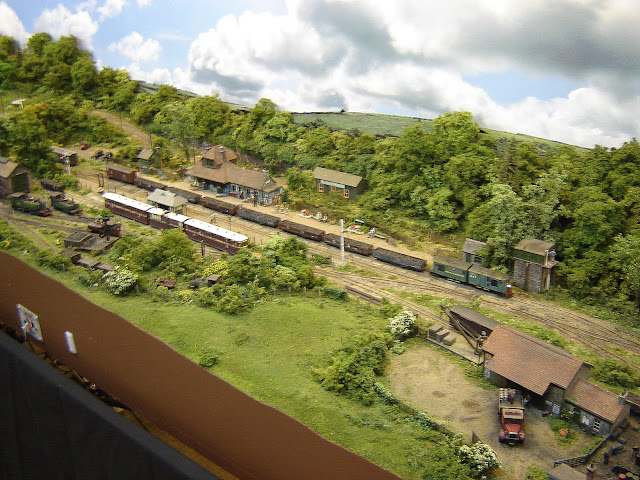 This is based on the proposed extension of the Lynton & Barnstaple Railway to Minehead, featuring not just stunning scenic work, but superb running and computer control, and also a well-thought-out imaginary history including freelance loco's and railcars that "might" have been built for the extension. One example of the latter is this Mallet "River Avon":

The builder of County Gate, John De Frayssinet, had kindly offered to give my son the "guided tour", which he was very excited about. As well as being allowed to view the layout close-up, and see the back of the layout with the stock, hidden tunnels, and computer control, the highlight for him was being allowed to drive a train! The deep concentration on his face hides his excitement, but don't worry my hand was not far from the controller stop switch! 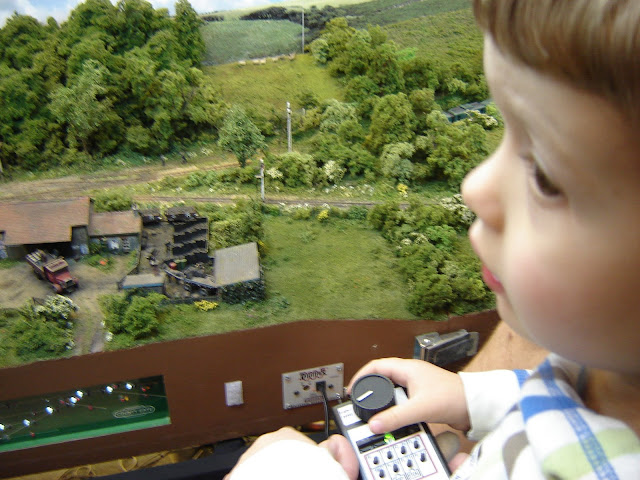 So many thanks John!
You can find a few more of my feeble photos here.
Posted by Michael Campbell at 21:03

Sounds like a good day out! Looks like they have less space for trains than when I used to go regularly. Nice to see some more pictures of Vauxhall Road too.

This is a show which has very much had it's day. Although at one time it was the South-East's not-to-be-missed event it's now a shadow of its former self. And although it's only twenty minutes away... I avoid.