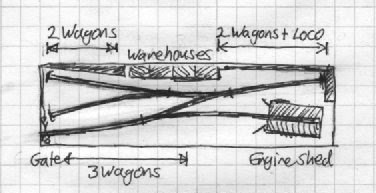 These are absolutely fantastic. Thank you very much. I have some thinking to do now and perhaps a little more planning...

My compliments on your vision! I'm curious, from where could I source an electric 3 lane turntable? Cheers

I don't know that you can. If you mean as an off-stage fiddle yard, that would have to be made. If you mean the traverser on scenic part of the the lower plan, the deck moves sideways and does not rotate like a turntable. My assumption was that it would be made to fit, although one of the German suppliers may make something suitable.