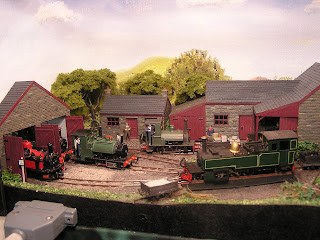 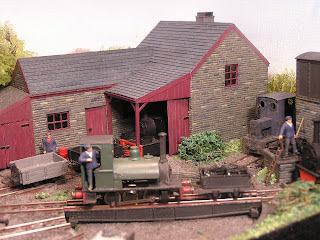 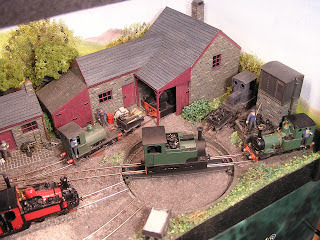 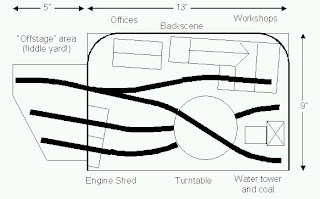 We are delighted to discover your blog. My son saw Southon Yard in Railway Modeller and now he is designing his own OO9 layout (with a bit of input from me!). He is stuck on how to create a small turntable like yours - please can you advise?

Yes it was quite tricky! The easiest option would be to modify an N-Gauge commercial one such as the PECO one, but that would be larger. I scratchbuilt mine.

Cut a hole to the diameter in the board and put another board over the bottom - I used 6mm MDF so the "well" is about 18 inches deep to scale. I lined the sides with Slaters stone sheet and plasticard capstones. Drill a hole dead central and glue two semi-circles of rail like this () - one is wired to one rail of the feed track, the other to the other.

I got a pack of gears and shafts from Squires (Bognor) and used an old motor from a toy. A large gear is glued under the baseboard with the hole opened slightly to make a bearing (perpendicular to the board). Then a shaft is passed through with a large gear at the bottom, and a gear cut back to a square on top, onto which the table is built. These should be a tight fit and superglue if required (I roughened up the shaft first).

The motor has a worm on it which drives a shaft, which has a worm driving the large gear under the board. I supported the shaft in plastic angle with holes in, glued to the board with bostik and adjusted while wet. I simply switch the track controller over to the motor and line it up by eye (takes practice!)

I built the table from plasticard around the cut-back gear on the shaft. The ends run on small brass pulley wheels (also from Squires) on the rails. There is a brass "wiper" at each end, one rail is connected to one, one to the other. Thus as the table rotates the pickups swap ends and the polarity is reversed, so the train always runs the right way!

It's a bit heath-robinson but it works, only slight problem is that the pickup wipers lift the table slightly causing a slight step in the rails.

Good luck with yours! Let us know how you get on.

Thank you for your advice. We have taken the easier route of a PECO turntable. We are novices!

Our next problem is working out how to get power to the lines which run from our turntable. From your photo it appears there is no electrical connection between the turntable rails and the rails it lines up with. Does this mean lots of parallel connections are needed underneath the baseboard?

Aah, now the solution to that is simple when you know how! It's easier to explain with a sketch but I'll see what I can do ...

The turntable (like all prototype turntables) rests on a circular rail around the outside of the pit. I made mine from PECO rail, but in two semi-circular parts. Each half is wired to a different rail of the adjacent track.

The turntable deck rails (i.e. the track) each have a wire down to a brass "wiper" as mentioned above, at opposite ends of the turntable. As each of these is therefore on different halves of the circular rail, each rail of the turntable track has different polarity - so the same track current as the adjacent track.

The great things about this are that:
1) No wires to the table deck to get twisted or break
2) When the table is rotated half-way the brass wipers swap which half of the circular rail they make contact with - so reversing the polarity to the deck. This means you don't need to switch the wires to the turntable, the loco will always move the "correct" direction relative to the controller even after being turned!

I don't know if the PECO turntable would allow for this - I think the circular rail is plastic? Perhaps the instructions will help.

Hmm...maybe we'd do better with a sketch! However, the PECO turntable has a pair of wipers and contact near the central pivot which we think does the same job as your rails. Are the turntable rails connected to get their power supply from one of the feeder tracks? For example in your layout diagram from the top left as shown? Are the contacts then wired to all the other ptoential lines from the turntable?

We've found a picture which shows the control box for your turntable power supplies (we think). This suggests the other lines are given power separately and switched on and off.