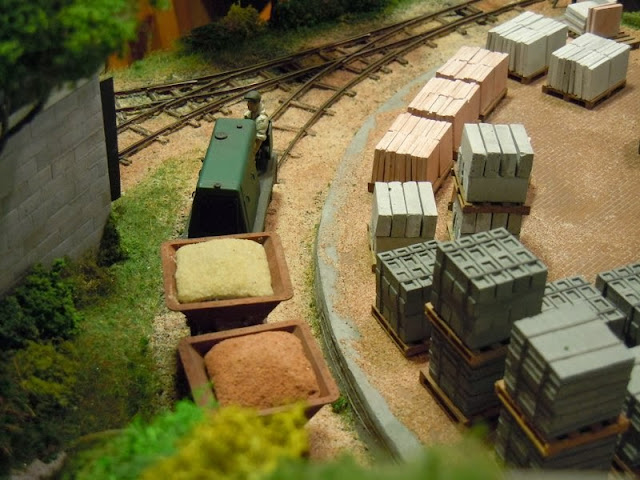 This project started when I read a book by Graham Lelliot about the Thakeham Tiles Railway. It described the very short 2’ gauge line used to move sand around the factory, originally from a quarry but later just hoppers filled from lorries, to where it was needed to make concrete. (The company stopped making tiles very early on, concentrating on concrete building products). I thought that a small, self-contained system such as this would make an interesting layout in a small space. The small space ended up being dictated by the EXPO-NG Challenge for 2013, which was in recognition of three anniversaries, for a triangular layout with sides in proportion 45:40:30 (up to 1.8 cm times those factors in cm). While I had no intention of entering again, I can't help doodle plans, and accidentally found the Thakeham track plan could be made to fit... 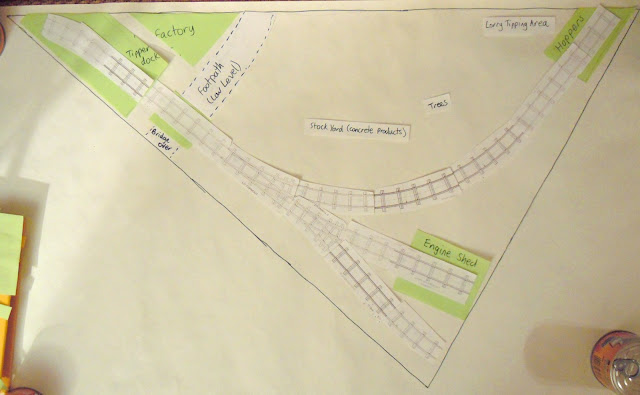 So with just 6 months to go before the deadline I made a start. First I paid a visit to the site at Thakeham - it is nearby, and the company still trades, although the railway has been replaced by a conveyor. A footpath crosses the site passing under the bridge that used to carry the railway, so a good feel for the site was gained. The unusual shape baseboard was then made from foamcore board, with allowance for the dropped footpath and a gradient down to the loading hoppers, and 4mm ply forming a fascia and backscene. . 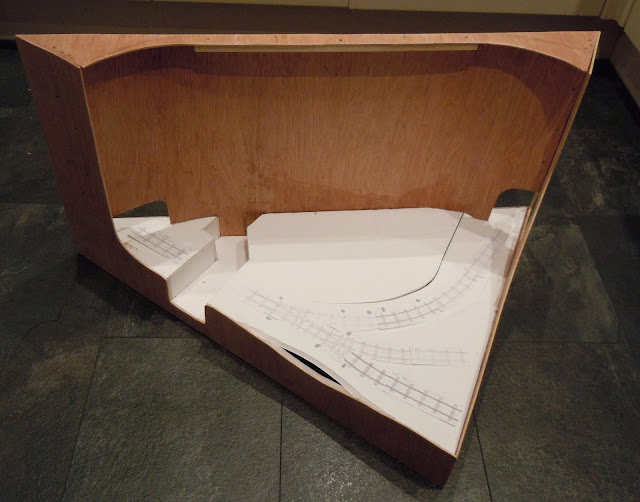 Track was hand built using KB Scale components and PECO rail. Points are operated by wire-in-tube and control is DC, with 3 isolating sections. Buildings use more foamboard with Scalescenes printed paper for the concrete block-work, while the bridge and details are made from plasticard. The backscene uses a commercial sky-paper, with photos taken at the actual location cut out and stuck on to form the foreground. 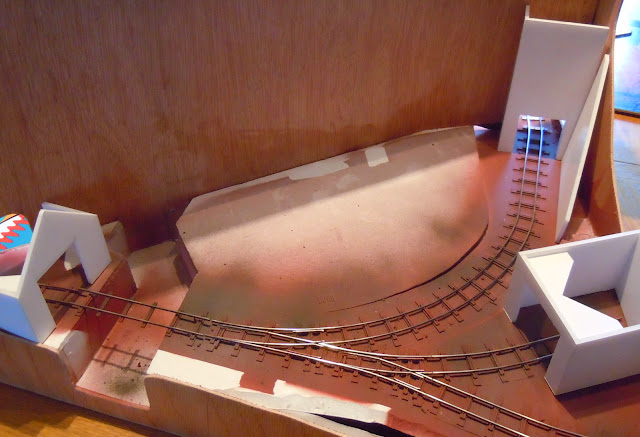 I felt it important that a model of a railway with one sole purpose - to move sand - should be seen to be carrying out that purpose! So removable loads were made for the wagons representing pale and red sand, which can be popped into the wagons under the hopper. Once they reach the tipper shed a swinging-arm lifts them out using magnets. 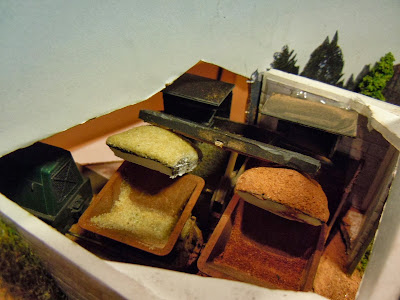 As the layout was built for an exhibition challenge, it is designed to be presented for exhibition. Short legs allow it to stand on a table at a comfortable height, a lamp provides illumination, and a small display board gives background information. 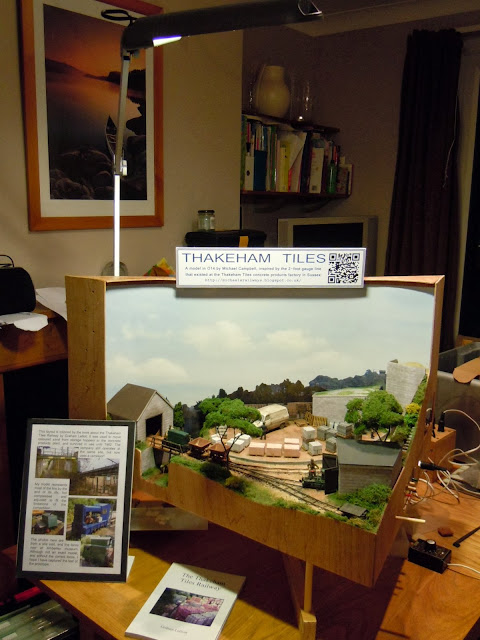 Some photos of the layout in operation: 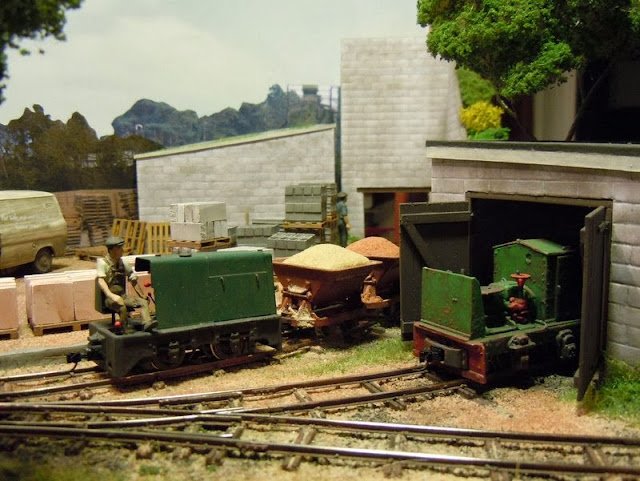 The Hudson Hunslet loco is built from a KB Scale kit. The real line had one of these, though it may not have seen service, it had a pair of an older type heavily modified with a low cab fitted to the end. The skip wagons are also KB Scale and are very similar to those used at Thakeham. The O&K seen in the shed is a Nonneminstre Models kit. 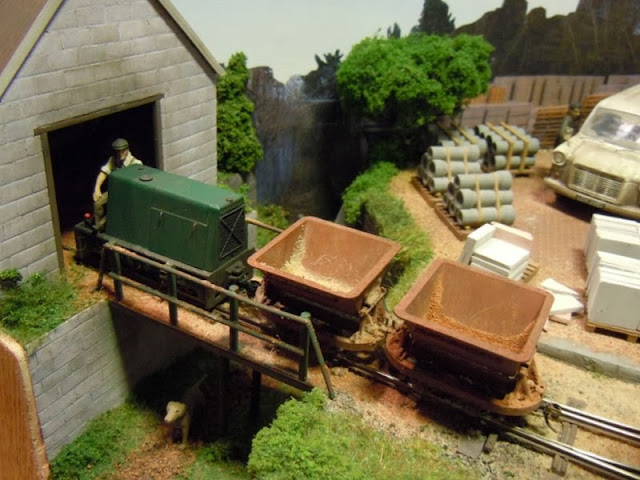 Some of the concrete products are by Skytrex but the slabs and kerbstones were cast from plaster. Light and red sand was represented with play pit sand and brick dust. 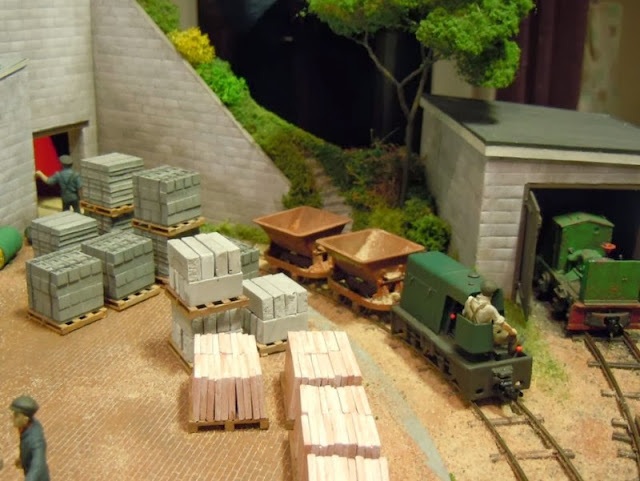 As well as attending a couple of exhibitions since EXPO, Thakeham Tiles featured in NG&IRM Review issue 100: 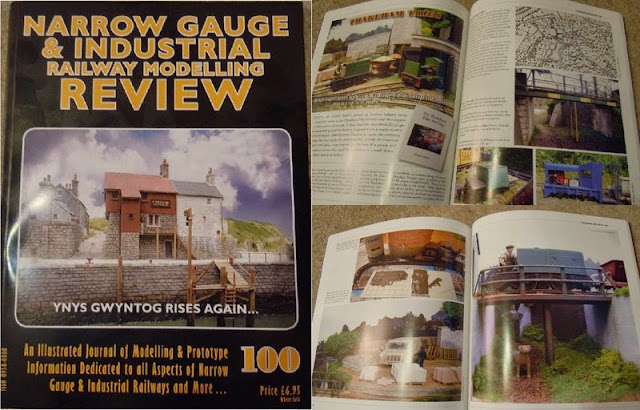 Follow the story of Thakeham Tiles on the blog.