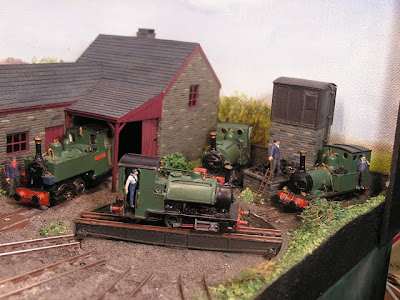 Back in 2004 I heard a rumour of a competition to be held at EXPO-NG that year to build a narrow gauge model railway in a shoebox. I don't know why the idea appealed to me but I couldn't stop doodling ideas, then I came across a large shoebox for my work boots ...! Of all the plans I came up with it was one based around an engine shed and workshop that seemed to work best. The main feature was a working turntable, which allowed the space to be fully utilised to show locos, and so I figured the layout could become a nice display piece at home as well as a challenge to build. 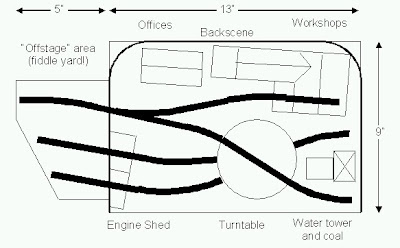 Indeed it was a challenge! The box is only about 5" high, yet the layout had to fit into it with the lid on! So the baseboard was made from thin ply and MDF, with 1/2" timber bracing underneath. The "fiddle yard" - which included the inside of the low-relief engine shed - slots into the end. It can be removed, inverted, and slotted into the back of the layout for packing. That slot is also used to hold a support for the lighting box, other supports are added at each of the front corners, these also hold the canvas backscene with Velcro. Although the rules said the lighting rig and controllers did not have to pack into the shoebox, once dismantled the layout, with fiddle-yard and rolled-up backscene did (just!) fit. 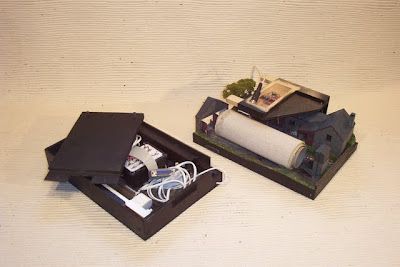 The layout with fiddle yard and backscene packed up to fit in the shoebox (right) with the lighting rig and supports, control panel, and controller separate (left) 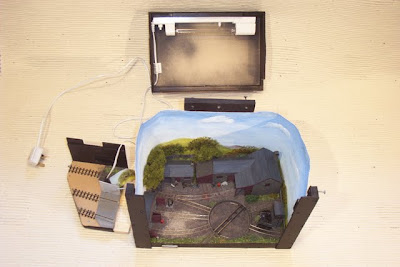 The supports and backscene in place, with the lighting lid and fiddle-yard ready to fit. The light is a 30W tungsten strip. The parts of the layout slot together and are held with pins - there being no space for bolts! 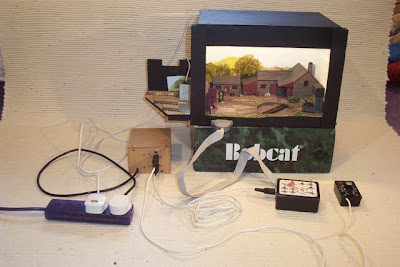 Fully assembled with controller and transformer connected. The separate control  panel plugs into the front of the layout with a D-type computer plug.


The biggest challenge for this layout was the turntable, with nothing commercial available (an N-gauge turntable would have been too large) I was forced to scratch-build. The inspiration was a picture of that at Pilton Yard on the Lynton & Barnstaple, and a similar one at Boston Lodge on the Festiniog Railway. I wanted an open-pit girder frame design, even though it was not the simplest to model! Also given the slim depth of the baseboard, getting drive to it would be tricky.

The table itself is just 10cm long, and built from plasticard with rails glued on top, and brass pulley wheels resting on the support rail in the pit. Each rail is attached to a brass wiper under each end of the table which contact the support rail, which is in fact two semi-circular rails wired one to each rail of the approach track. In that way power is carried to the turntable track, and polarity reverses as the table rotates 180 degrees.

A pack of gears and shafts was bought from Squires to provide the drive. One gear was cut to an oblong and built into the turntable, another had the hole opened slightly and glued to the underside of the board as a bearing to ensure the shaft is vertical. A large gear on the shaft under the board is driven by a worm on a shaft that runs across under the board, at the other end is a smaller gear driven by a worm on the motor - from an old toy - that is mounted inside the workshop. A switch directs power from the track controller to the turntable motor, with the gearing it runs at a nice speed and alignment is by eye. Simple, space-efficient, cheap and effective! 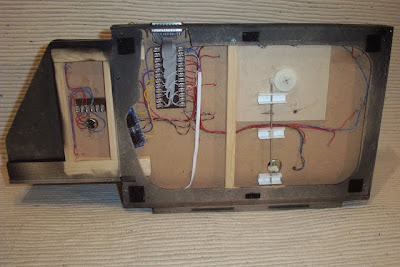 The underside of the board showing the turntable drive, the SEEP point motor, and the wiring of the 9 track sections to the socket via a tag-strip. The depth under the baseboard is around 1/2"


Track is Peco, with just one point powered by a SEEP point motor. Fortunately they are not very high! As it is a loco depot there are 9 track sections for isolation. There was no space on the layout for the switches so a separate control panel was made up, which plugs into the layout. This has a rectifier/capacitor to drive the point motor. A separate box holds a transformer and high-frequency track cleaner, and a hand-held controller plugs into it, so this can be used for any of my layouts with a single power lead. 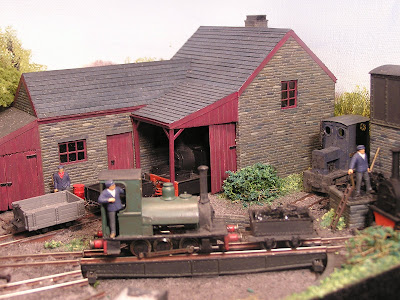 The workshop building had been constructed for a previous layout that was never completed, it was based on a stable and carriage shed I once saw but built from different materials. The chimney reaches the maximum height that will fit in the shoebox! The office had also been built for that layout, these just needed final details and painting. The engine shed was inspired by the old shed at Boston Lodge, and is only about 1/2 deep, the back interior wall continues on the fiddle yard board.

All the buildings are scratch-built from plasticard and Slaters embossed stone and slate sheets, painted with enamels, the water tower uses panels from a Wills Vari-Girder bridge kit, there is also a water crane from Chivers. I was fortunate in that my mother painted a superb backscene in oils on the canvas, which really completes the model. Ground cover including ballast is mostly my own mix of plaster and powder paint with a little sand, brushed into place dry and sprayed with water, while trees are wire-frames made to fit the location with Woodland Scenics foliage. 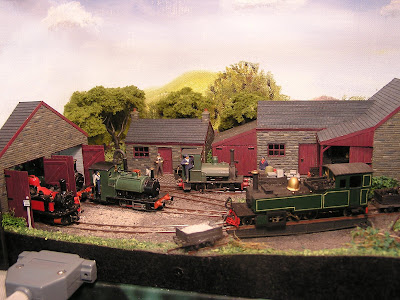 There were a number of other superb shoebox layouts entered in the competition at EXPO-NG, so I was pleased and honoured when Southon Yard won. It generated a lot of interest, and even appeared on Carl Arendt's Micro-Layout website carendt.com. In fact the statistics for this Blog show that the original post on Southon Yard is the most searched-for page! It has been exhibited a couple of times since too, although it is not the most interesting layout to operate! Having said that, it can become like one of those sliding-tile puzzles - with lots of loco's and only one gap! 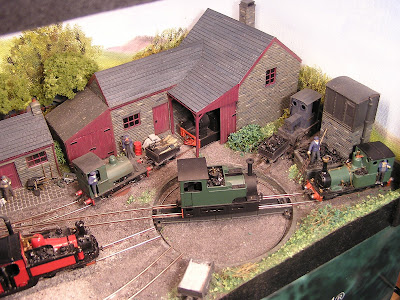 For some time the layout resided on top of the bureau in my dining room, as expected providing an interesting setting to display locos and have a quick "play" from time to time. However, eventually I figured that I could fit a lot more layout in the space, and so Awngate was born. I still have Southon Yard though, and it may well appear at exhibitions in the future.