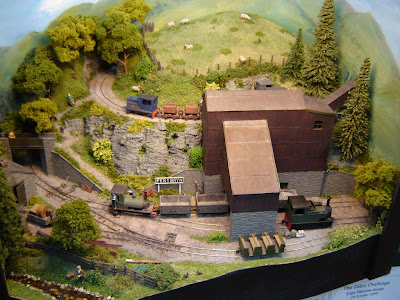 After winning the 2004 EXPO-NG challenge with my Shoebox layout Southon Yard, I swore that I wouldn't enter such a competition again, or at least not for a long time, as it had taken a lot of time and effort to get it complete in time. Then the 2005 competition was announced as the "Cubic Challenge", a layout no bigger than 50cm x 50cm x 50cm, of course I wasn't going to enter but couldn't help doodling some ideas. One was for a quarry which utilised the height and depth of the space with some interesting scenics, and trains working on two levels. 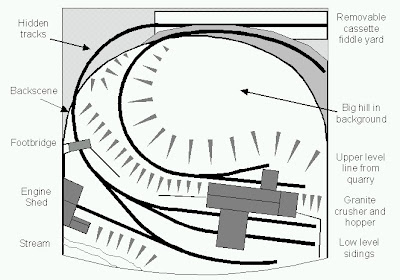 Now I had a model granite crusher/loader plant left over from a previous, unfinished layout, and also a footbridge and low-relief engine shed ... So call me a fool but I was hooked again! The plan that emerged represents a granite quarry on a branch from a line in North Wales. This time it had to be quicker and easier to build, no turntable or complex assembly required. No new buildings were needed. I also wanted to try some new techniques.

The first was the "baseboard" - this was made from 5mm foam-core board, which is a sandwich of two layers of card and a filling of expanded polystyrene. It is easily cut with a Stanley type knife to very accurate shapes, and glued with a hot-glue gun, so getting a complex baseboad built was quick and easy, taking a few evenings in the lounge rather than days in the garage! Construction was like an egg-box with bracing slotted together like # shapes, the result is surprisingly strong and extremely light, the only drawback is it is vulnerable to knocks, getting caught, etc. In future I'd go for a foamboard core with a thin ply "skin" for the facia and ends. The design incorporated a convex front fascia, sides and wings, and a 30W Tungsten strip-light across the top. 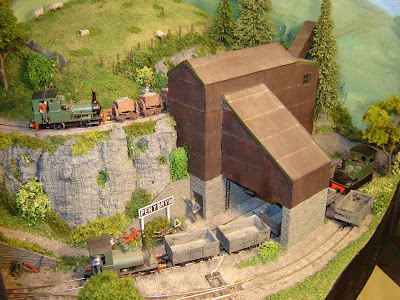 Track is PECO again, I had some old 9" radius points which really helped with fitting it in. Rail was pre-bent for the curves, the lower level gets down to about 7" radius and the upper level nearer 5"! This time I used wire-in-tube control, these run back to slide-switches mounted in the right-hand end of the board, which also switch the frog polarity. Electrics are simple DC with an offcut of aluminium used for a swich panel on the same end, although a shuttle module is wired into the upper line.

At the rear of the layout I wanted a way to swap trains around quickly and easily in a small space, which brings me to my second experiment. While browsing a DIY store I came across some trunking for central heating pipes that I thought would save me a lot of effort! This technique has proved simple, effective and has been copied by several others - to find out more about it click here. 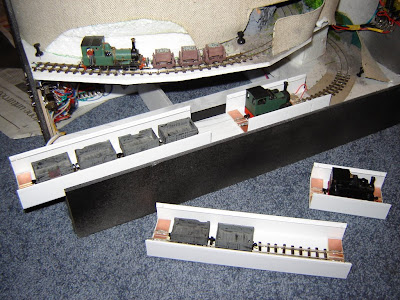 With the buildings already made for a previous layout and just needing painting, progress was relatively quick. Once again my Mum painted a great backscene on canvas, which is easily curved around the scene. Scenery is based on expanded polystyrene with my usual mix of plaster, powder paint, and sand, used as ground cover and ballast. The rock faces are cork bark, usually I'm not keen on it but with a little work I think the result is reasonably convincing. The stream is simply clear varnish in a modelled stream-bed, trees are mostly wire-frames with Woodland Scenics foliage (although there are a couple of commercial ones). A little detail and junk litters the scene, and a few figures (and sheep!) add life, while trying not to over-crowd the scene. 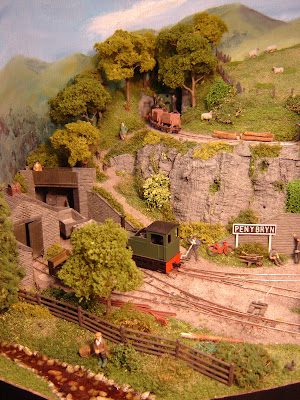 The third experiment was to actually make it a working layout - not just that the trains move but they appear to move loads around. The main operation is to load wagons with granite from the crusher/loader, so inside the building a plasticard hopper is fed via a chute to the side of the layout (disguised as a conveyor), where a larger hopper is attached. Real crushed granite is spooned in to fill the wagon under the chute, simple but effective, and a little bit messy at times! 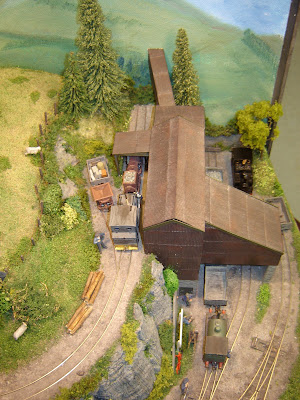 The upper level was troubling me, I wondered about how to make the small skips tip a load without derailing when my friend Simon Wilson came up with an idea - so wacky that I challenged him to make it work! He rebuilt some Roco skips with straight-sides that rotated through 180 degrees, with a "full" load stuck to the bottom of the empty skip! Gravity means they default to the "empty" state so a small magnet and a wire "handle" are used to hold them full, when pushed into the unloading dock a fine wire peg rises on a curved wire inside the dock, and the body "magically" emerges empty! 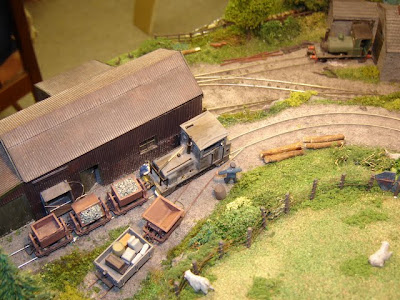 Another experiment for me was ditching the typical style of 009 coupling (I had used Bemo and DG types previously) and going with the Microtrains "buckeye" type couplers. There are obviously pros and cons of each type, but I am much happier with them.

This time I didn't win the competition, but that wasn't really the point, it was great fun to build, and I think resulted in an attractive and unusual layout. It has also been a useful test for a number of techniques - I learned a lot that has already been incorporated into Awngate, and will be in other layouts in the future. Sadly the layout proved difficult to store (it is surprisingly big when compared to a loft-hatch!) and after suffering mice trying to eat it in the garage, it now has a new owner who is able to make better use of it!