A couple of months back a 009 society challenge was announced in the 009 News, to build a layout using two modular baseboard kits from Norfolk Heath Works. This means a total size about 2' 6" by 11" with a sector plate in one corner, and an option of a dropped front to the other board. The challenge runs until next March.

Of course I sketched a few ideas for fun but with no real intention to take part. One idea did grab my imagination though, based around a quayside/wharf with warehouses and other buildings surrounding an "inglenook" track plan. Most of the buildings would come from the Petite Properties range, after my experience of building one of their kits recently, and they fit the scene well. The layout would be front/end operated and could have a simple back-scene and lighting bar for an attractive display.

I like to check ideas with a full-size plan, so drew out the baseboard (on just 4 sheets of A4 paper) and printed some Peco point templates. The original idea used Y points for their shorter length - I know the set-track points are shorter but they have dead frogs, which I wouldn't want to use on a shunting layout. It seems to work but I wasn't happy with the arrangement of the tracks.

Using  left and right hand points for the sidings looks better, but there is still a severe reverse curve to the Y point which looks odd, and will be a pain for operation.

Using just right and left hand 12" radius points gives straighter sidings and more practical operation, though there's now a reverse curve into the fiddle yard. I think this is a better compromise, and pulls the tracks forward making more space for the street at the back. Oh, and it looks like I have these points in stock - found in the garage, recovered from a previous layout.

The benefit of a full-size plan is to check clearances. As you can see the headshunt and the sidings will take 3 wagons easily, and 4 at a push - small wagons will be required! The Petite Properties shop gives some perspective, and road vehicles confirm the street will work.

I still didn't intend to actually build the layout at this point, it's just a fun exercise. After all I don't need another layout project. But then I had to have an operation, and knew I'd be recovering for a while, so maybe a small table-top layout would be good therapy?

So here's the pair of baseboard kits, loosely assembled - they are not yet glued but the parts fit together so well they hold together. Before assembly I need to drill and cut some holes, but I'm not yet up to using power tools so that will have to wait. I've transferred the track-plan to the boards with only minor adjustments. I'll permanently join the boards (2' 6" is hardly large enough to warrant splitting) so the points can be placed over the join. 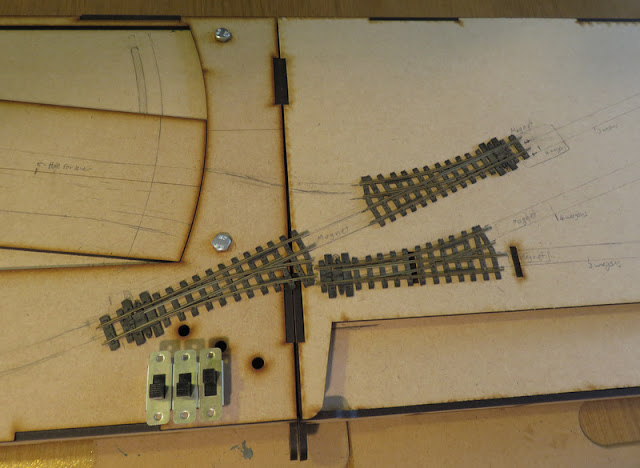 Before I start I need to decide on point control. With this type of small layout I'd normally choose wire-in-tube connected to slide switches for frog switching, the photos show how this could be arranged for front operation. However there really isn't space to route the wire-in-tube to the points, so I don't think this would work. 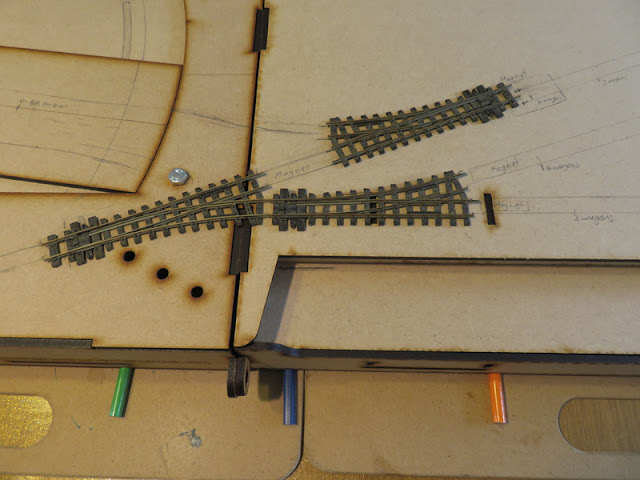 Another approach would be to use dowels under the baseboard which could protrude through the fascia as represented by the coloured pencils here, and have a wire connecting them to the point tie-bar. The slide switches could also be connected to the dowels under the board to switch the frogs and limit movement, this is similar to the method I used for Thakeham (though that used wire-in-tube too). This could get fiddly to arrange though, especially with some tie-bars at an angle, and the dowels could be a bit of a reach for end operation. 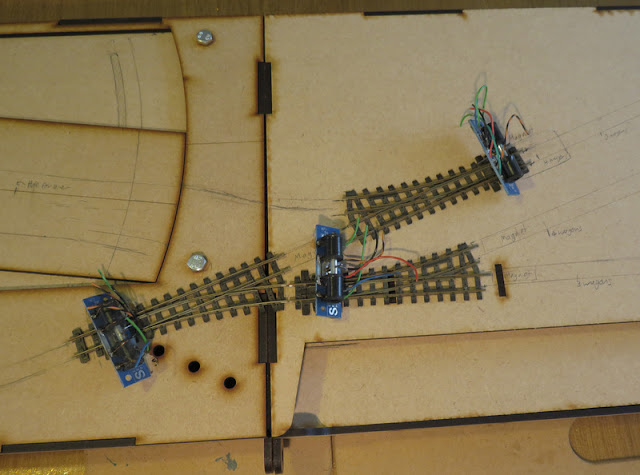 The other option is to use point motors, and a search of the garage has turned up three SEEP motors. As shown here they should fit under the points without fouling bits of baseboard, and could be easier to arrange than manual mechanisms. There's a bit of extra wiring and it means I need to use my larger power-pack for the layout, which has a CDU - or build a simple capacitor unit into the layout. It also raises the question of where to put the switches, there's no space for even a small panel in the fascia (there could be up to 4 isolating switches too). I could use an external box, mounted on the end of the layout, or on a wander-lead to  go in front. Alternatively the switches could be distributed along the fascia next to the points, but as above that might be less convenient for end operation.

Lots to think about...
Posted by Michael Campbell at 23:19