Unfortunately recent family committments, and the usual mad rush towards Christmas have meant little time for working on the layout. However I have started cutting some track, I have also cut holes in the baseboard for the point motor operating rods and the uncoupling magnets, and I have stuck down a layer of cork, so I am now ready to start laying the track. With any luck I will get this done over Christmas and so should have an update with photo's in the new year!

Looking at Carl Arendt's Micro-Layout website last month I spotted a photo of Southon Yard. Then I noticed it wasn't my layout, but a near-copy built by a chap called Sven Loeffler in Germany. Even the buildings and the colour-scheme of the windows and doors was similar! Sven had changed some details but had obviously so liked the concept of Southon Yard that he built his own! You can see it here (about half-way down the page):
http://carendt.com/scrapbook/page67/index.html
Compare it with my layout:
http://michaelsrailways.blogspot.com/2007/09/southon-yard-is-motive-power-depot-of.html
Well, they do say that imitation is the sincerest form of flattery, so I am flattered ... !

A Happy Christmas to all, and I promise a full update in the New Year!
Posted by Michael Campbell at 13:27 No comments:

On Saturday I was at "EXPO-NG", the biggest narrow-gauge model railway exhibition in the UK. As usual there was an excellent selection of layouts in a range of scales and gauges. In addition there is good trade support from the specialist suppliers to narrow gauge modellers, so it is an ideal oppotunity to see the products of traders you rarely see at other shows.

I took my camera and have posted photo's of most of the layouts here:
http://campbell-modelrailway.fotopic.net/c1397904.html
I know there are probably one or two I missed, also there was a "Pizza Layout" competition which I did photograph but they didn't come out to well, expect to see them on http://carendt.com/ shortly!

I was helping out on the 009 society stand (well part of the day anyway), and managed to put together a few couplings and a wagon kit. One of the best things about shows like this is meeting people you only ever see at these shows!
Posted by Michael Campbell at 13:11 1 comment:

Still not much progress on the layout, however on a recent family holiday to Devon I managed to slip in a trip to Pecorama. If you are ever in the area it is well worth a visit, great for families of all ages as well as model railway enthusiasts. Needless to say I spent some time and money browsing the shop and I now have all the track I need (I had some point salvaged from a previous layout but not enough). I also bought some card kits from Metcalf Models I intend to use for the factory, and low-relief houses for the back of the layout.

As an aside, I noticed the other day my 10-month old boy was playing with a micro-model railway layout. Indeed, it is what is often called a "Pizza" layout, featuring a circular track plan. It came with his Fisher-Price Peekaboo block train. It features a tunnel and train with 2-2-0 loco and 2 wagons, it even has digital control - that's right, you put your finger in a hole in the top of the block and spin it round! Is this the smallest micro-layout? Posted by Michael Campbell at 17:12 2 comments: 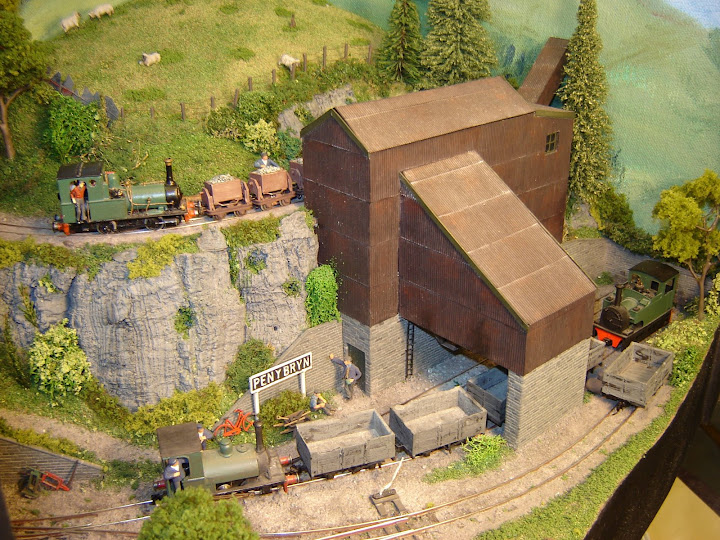