With Awngate being exhibited at Narrow Gauge South at Winchester this coming weekend, things have been getting a but frantic. I've got this week off work, the idea was to have some family days out, but between the rain showers and my daughter having chicken pox, outings have been somewhat limited. This has meant I've caught up on the progress I had hoped to make by now. 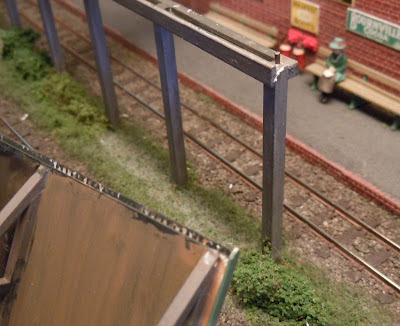 One job I have been meaning to do for a while is to try and get the station roof to sit correct, as it has a habit of pinging off the support legs which lean inward too far, making the roof sit too high. It may not be obvious, but it looks wrong to me. The solution was to drill a hole in the top of the support post and insert a piece of stiff wire (paper-clip), as shown above. Not so obvious is that the roof (upturned in the foreground) has a similar hole for it to locate in. This is just enough to hold the roof and support together securely, as shown below. 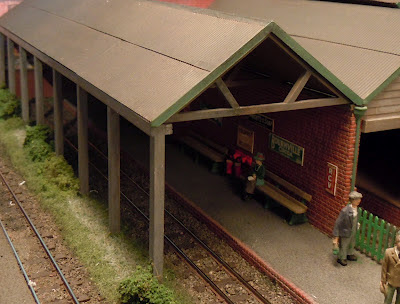 The engine shed has been painted and detailed, at least as much as I can for now, but more on that another day. While bedding it into the scenery I tried out a new toy - this static grass applicator bought off ebay for £10. All right, it is just an electric fly-swat mated with a tea strainer, but for that price it was worth a try, and first impressions are that it works well. Now a £100 branded device might be better, I don't know, but it is a lot better than the puffer bottle and a fraction of the price of the brands... 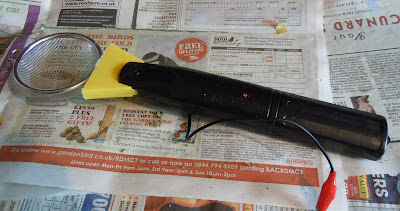 Further to the experiment with magnets in the last post, I have fitted the ends of the train cassettes with pairs of magnets beside the track. The idea is that as the loco stops on the non-powered loco cassette, the magnet uncouples it from the train. Some manual shuffling may be required but it should be much easier to separate the loco than before. As the magnets are at the rear of an outgoing train there should not be unwanted uncoupling. 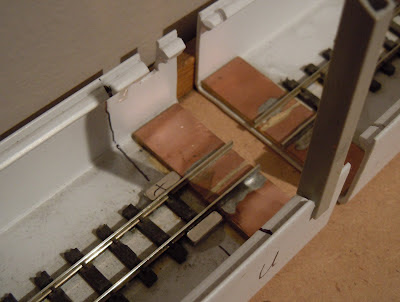 I have also been cleaning wheels and testing locos, as well as checking everything is ready. I must find the drape to hide the trestles ... anyway, still lots to do. However if you can make it to NG-South this weekend (it promises to be an excellent show as always) do come and say hi!

Posted by Michael Campbell at 00:14