As the layout nears completion it is time for a quick tidy up of it's external appearance. Now the rules of the competition dictate that the box-file lid must close, but in any case I wanted the layout to still be a box-file externally when closed up. In other words, to look as much like a normal box-file as possible and be able to be stored as one. Since I am going to the trouble and compromise of building the layout in a box-file, it seems to me to defeat the point were it to loose those characteristics. However the outside of the box was starting to look a bit tatty and "butchered".

Amazingly I found a matt-black emulsion paint test-pot (Crown "rebel") at my local DIY store (presumably for the Goths, but why would you need a test-pot to see what black looks like?!). All the exposed chipboard of the box sides where it has been cut had already been sealed and smoothed with PVA glue. So the edges, and any other exposed card areas, or marked external surfaces, were touched-up with the black. 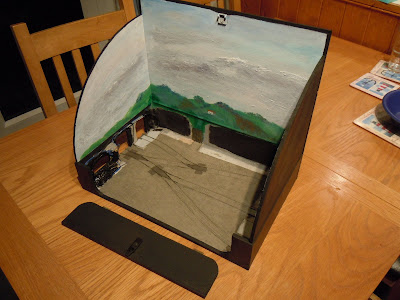 Other than the two holes in one end for the tracks, the main modification to the box was to cut out a section of the front. I've kept this to re-fit, using some small hinges obtained from Squires. The hinges are super-glued to the box and then track-pins pushed into pre-drilled holes via the holes in the hinge plates. The lid catch still works, the hinged front now makes the closed box much stronger. 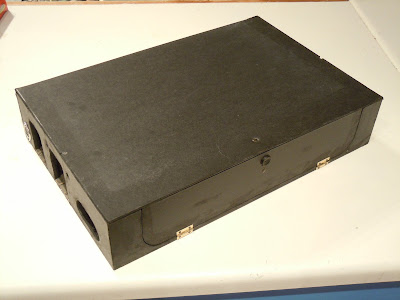 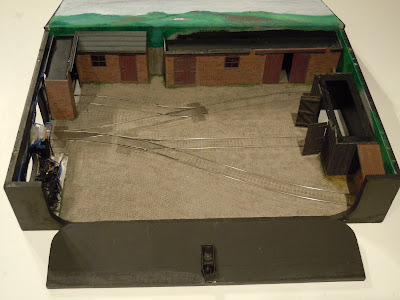 I need somewhere to store the buildings, end-panels, extension track, and stock for this layout, so what better than a second box-file? I've been using one to store all the bits of the project, but to protect the contents I have used some cereal packet card to organise it. The backscene end panels slot inside the lid, the extension track along the back edge, and a set of "egg-box" partitions protect the wagons. The trouble is there isn't space for the tops of the buildings so I will need to re-organise, I'm sure they should fit in somehow! 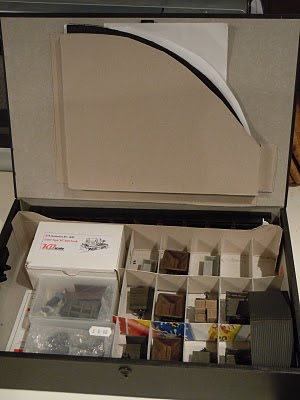 Posted by Michael Campbell at 23:54