Today was the Sussex Downs 009 group's members' day. Although I wasn't showing one of my layouts this time (I did at the last two, in 2007 and 2009), four other group members had layouts there, so I knew I'd be helping out somewhere.
As it happened I spent most of the day helping with Mark Holland's layout "Spirit of Welshpool". I've operated this layout before, and Sparsholt last year, but since then Mark has progressed the scenary, particularly the town area. Also he had (just) written an operating timetable - well, sequence at least. The idea was to give some order and meaning to operation, and given that the track layout is based on the real thing (albeit with serious compression) that makes sense. There were some hitches as the sequence was de-bugged, clarified, and operators were educated! 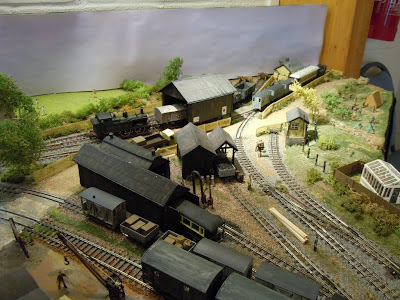 The above photo shows the station and goods yard. Mark has now built one of the W&L Pickering coaches (with several more to build), and has models of the original locos Earl and Countess, although not yet fully working. However this has shown that the track layout was based around more compact stock, leading to some tight clearances and the loco and carriage sheds are too small! 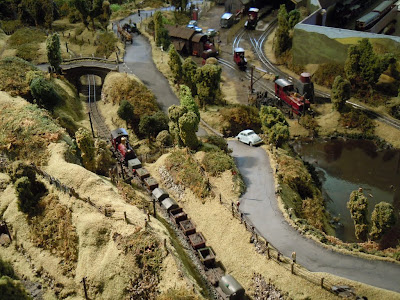 The Dovey Valley railway by Dick Wyatt (above) is one of my all time favourite layouts, featuring in an old Model Railway Constructor album I had as a teenager, and an inspiration for 009 modelling. You may remember it as the one featured in the Two Ronnies sketch! 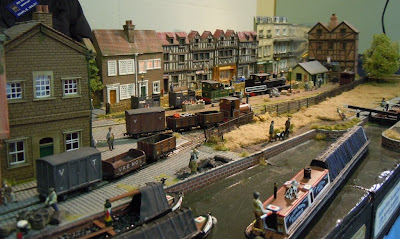 Charlie Inslay's Kinwardine Wharf is a great little layout, the first time I had seen it in the flesh, although it was in Railway Modeller a couple of years back. Charlie has some lovely locos and stock too. 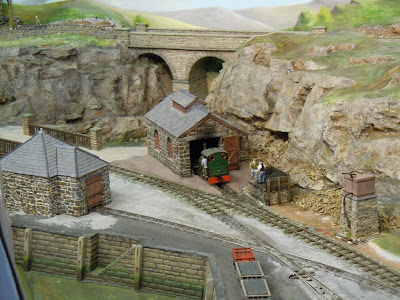 The award for "Best Unfinished Layout" (on the basis that no layout is ever really finished) was awarded in memory of Alan Fall, a group member who passed away last year. The most votes went to Martin Collins' Llandecwyn, a deserving winner. This layout is Martin's home layout and I last saw it at the first Member's day 4 years ago, it has made some progress since then but is still far from finished. However the quality of Martin's modelling is superb and this photo gives some indication of how good it will look when the layout is complete.
Martin was also responsible for much of the organisation of the show, along with Tim Sanderson, with much work done by Mike and Theresa Fox, and Doreen Fall in the Kitchen. Thanks to all of those, the exhibitors and visitors. The number of visitors was a little disappointing, probably not helped by being a bank-holiday and half-term weekend, and a rather remote location. However everyone seemed to be having fun. I've uploaded pictures of the rest of the layouts, please click on the link below.
Posted by Michael Campbell at 21:45