A collection of projects

Since we are expecting to move house soon I had cleared away all my modelling materials and most of my tools into boxes, I even finished Thakeham 3 weeks before EXPO to allow time for this. But as is the way with house moves it seems we are still some way from the big day, so a box was reopened and some projects dug out. 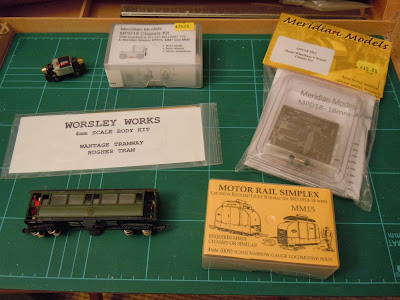 Bottom left is another Egger coach grabbed at EXPO so I can increase my rake to three, or run a second mixed train (Awngate only fits two bogie coaches).

Above that is a Wantage Tram etch, along with a Halling chassis (top left) I got to go in it. However the Halling doesn't fit as it is too long, a shame as they are superb runners, so I have other thoughts developing to use that. Meanwhile I picked up a Meridian MPD18 chassis kit at the Convention.

Bottom right is an impulse buy from EXPO-NG, a WW1 Simplex should fit Awngate nicely. My son wants me to build the full armoured version but I'm leaning towards protected. This was bought with the MPD18 chassis to fit - but this time a Mk2 version despite being bought just a month later than the first I bought, hence the different packaging!

So there is plenty to get on with. The coach is probably the easiest having done two already, and the Simplex if a "proper" kit so should be reasonably straightforward, but I'm keen to start the tram loco to have something a bit different for Awngate, even though it may be the most complex project here.

So here is the MPD18 Mk1 chassis! It proved fairly quick to put together, though being tiny it is rather fiddly. The etch fits together very cleanly, I'm not convinced by the motor mount but it seems to work. I'd rather have larger wheels, these are just wagon or pony-truck wheels and I think they'll struggle to pick up power well. The axle is small too, 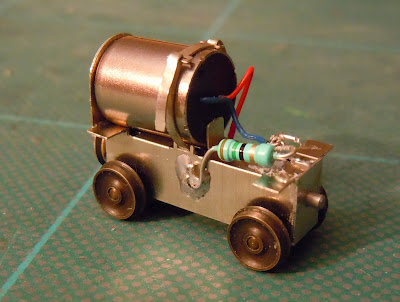 A couple of tips to anyone building one:
- Two brass tube sleeves are supplied to allow the worm gears to fit the smaller diameter axles. The instructions suggest drilling holes through the sleeve tubes to allow the superglue in to attach them to the axle, this sounded fiddly so I simply cut across the tube with a razor saw until a hole appeared.
- The pick-up on the insulated side is supposed to be fitted under the chassis by gapping the tiny PCB and soldering the upper half behind the lower part of the chassis side. I found this impossible, it would have been easier before assembling the running gear into the chassis. But then I realised I didn't need to bother as it could be superglued to the outside of the chassis and work just as well! 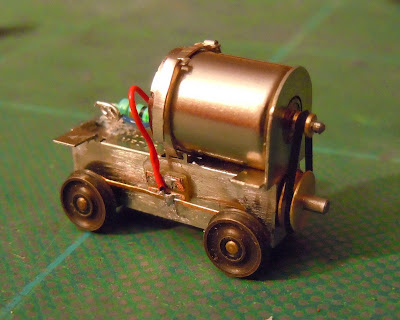 Considering it's tiny size and it is the first 009 chassis I have ever built (other than a Salford Models Hudson diesel which I failed to get working as a teenager) I'm rather pleased. It seems to work - but only with a finger on it, as it is too light to pick-up power! I need to add more weight to properly test it.

Posted by Michael Campbell at 13:30

Nice one! I struggled with my MPD18 kit, but it was my first soldered kit. Also I think I screwed up with the threadlock. :(

So whats the difference between the two chassis kits?

I don't know yet, I guess we'll find out when I get to the second one!

ardAn intriguing mix of projects Michael. Could I be cheeky and ask how long the Halling motor bogie is, and it's width across the motor please?

The best answer to that is to see the Halling website:
http://www.halling.at/Zubehoer/Antriebe?languageid=2

There is a data sheet with all dimensions:
http://www.halling.at/data/datenblatt_0000020_1.pdf

Which helps as I have packed my calipers...