I spent the weekend at the first ever 009 Society Convention, held in honour of the 40th Anniversary of the Society. Conventions have been going for years in the US and Australia but I'm not aware of such a thing in the UK, so this was a bit of an unknown for the Society. In the event the hotel was fully booked and the conference facilities filled, some members having travelled from as far as the US and Australia...!

There was a theme of historic models in keeping with such an anniversary, and a highlight for me was the display of a section of P. D. Hancock's Craig & Mertonford layout as re-assembled and preserved by the model railway club he once attended, along with much of the original stock now in the hands of others. P. D. Hancock was possibly the first to build a 009 layout starting in the late 1940's, and through regular articles and eventually a book he inspired many others to follow in his footsteps, laying the foundations for 009 as a popular modelling scale. 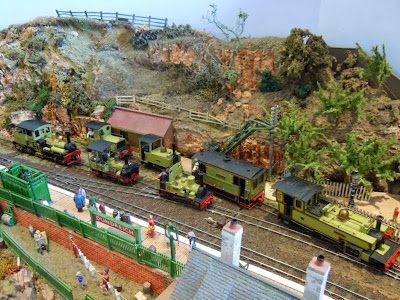 There were many other layouts too, some well-known, others not seen at exhibitions for years, and several I had never seen before. From the trade perspective 009 has never been so healthy, with Minitrains now having an extensive range and showcasing new products at the convention (as well as sponsoring a competition), news of the ready-to-run L&B loco development by Heljan, and PECO having launched a range of RTR wagons and coaches, seen here on display. The composite coach has just been launched and (unsurprisingly) stocks at the convention sold out quick, the brake coach will follow. I have to say these look amazingly detailed, though a little large for Awngate, though when unlettered versions are released I could be seriously tempted! 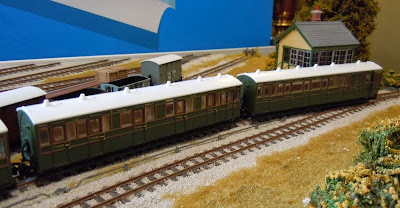 The society second-hand sales stand was popular as always, and there was a good range of clinics or seminars on a variety of subjects, which were well attended. On the Sunday there was a great range of members own projects on display through the conference rooms, lounge, and bar! I set up my shoe-box layout Southon Yard, it was nice to get it out after several years in the loft, it's fun to play with (for a while!) and attracted a lot of positive comment. 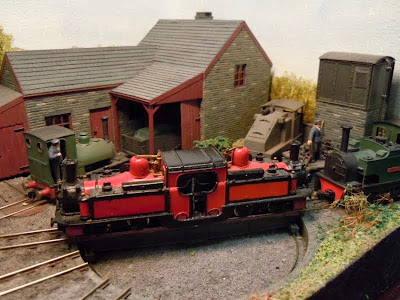 The centre-point of the event was the Dinner on the Saturday night, though there was always conversation to be had over a layout, at breakfast, in the bar, along the corridor, with old and new faces to see. Indeed it was the people and atmosphere that made the event a success, the feeling was more like a big family party than a model railway show. A truly memorable event, can't wait for the next one!

Rather than overload this post with pictures I've uploaded a selection here - sorry no captions yet!
Posted by Michael Campbell at 23:31

Great to see that slice of the C&MR, and that it has been kept in stewardship by his original club. The locos are an eye-opener, being so varied and all in a uniform livery. I am sure I must have seen them all at some time or another, but it is great to see them like this. Wish I had been there!