The idea of building a layout in a box file is not new, I remember reading about an 009 layout in two joined box files in a magazine back in the 90's, and it was probably not the first, although micro-layouts seemed less popular back then. Phil Parker pointed out the Double-O Gauge Association ran a boxfile competition a few years back, and I should say I really admire Phil's own Melbridge Box Co.

Designing a successful micro-layout is not easy, particularly with such tight constraints. Of course "trains" must be short, curves and points tight, and operation will be limited. However while the layout may be a gimmick (let's face it, it is), I want the model to be serious - that is I want (reasonably) interesting operation that is not un-prototypical, a setting that is plausible and not too contrived, and of course to build it to the best standards I can manage. Even with some experience of such small layouts that is a tall order!

The size of the box file and the rules are not the only constraints to the layout design. While the Hudson "Type 1" curves are very tight (93mm radius), allowing for very short points even in 7mm scale, they are not ideal for shunting over and limit stock to the shortest possible, so "Type 2" (260mm radius) are preferred. Experience has taught me to allow enough straight in sidings where coupling and uncoupling is to happen! And while the lead track or "cassette" can be fixed to multiple openings in one end of the box according to the rules, I don't find moving a cassette "interesting" operation, so prefer that to be used only for changing stock

Most industrial 2' gauge lines were built for one traffic, e.g. quarried sand or aggregate, so operation is not always interesting. Also while NG may be ideal for a cramped site, many industrial sites and quarries sprawled over large areas. So what prototype could provide a plausible and interesting setting? Well, regular readers may remember my post about Narrow Gauge in a Farmyard - nearly 3 years ago I found this hand-worked line at Tatton Park Farm in Cheshire, and postulated that it would make an interesting layout assuming locos were used! 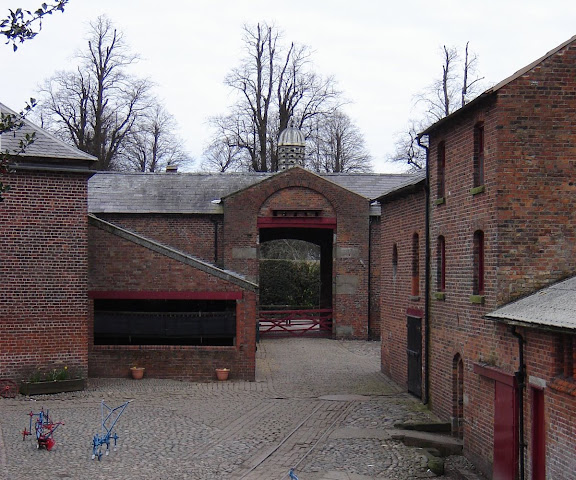 The plan I settled on is essentially an Inglenook (3 sidings that can form a shunting puzzle) with the addition of a kick-back. This is the same as I suggested to Phil for his Melbridge Parva layout, and indeed used for my own Pen-Y-Bryn Quarry, as it is a versatile plan for a small space. Here the line enters under an archway (similar to Tatton but much smaller) and splits into sidings serving different parts of the farmyard: a feed store, livestock shed, stables, and a heap of coal (for the dairy as well as domestic use). The kick-back is the blacksmiths, also used to stable and repair the loco(s). 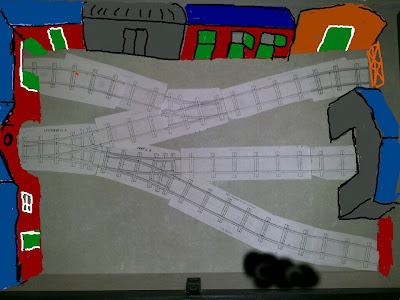 The next task was to mock up the buildings - cereal packets were cut up and stapled to approximate shapes. Being new to 7mm scale I needed to visualise how big the buildings would be, and check clearances. You can see I changed the design of the buildings along the rear slightly, but all seemed to work. Of course the upper parts of the buildings will need to be removable to allow the lid to close. 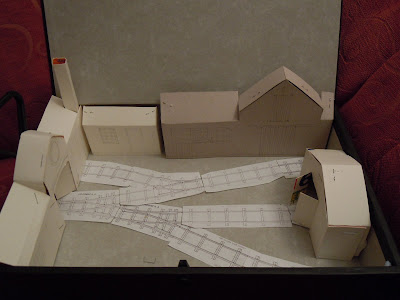 Posted by Michael Campbell at 23:00

An interesting concept, Ove toyed with giving boxfiles ago myself, but never taken the plunge.

Will be watching with interest

Excellent stuff. How about saying it's an estate railway rather than just a farmyard ? These operated all sorts of stock including passenger trains. Look up Arthur Heywood here: http://www.perrygrove.co.uk/heywood-collection.html for inspiration.

Good point about the mocking up. You have to do it more for a micro layout than a big one as every single building matters.

I'll post a full history of the line soon (when I have made it up) - but suffice to say it does extend beyond the farmyard!