Work in progress (but not mine!)

OK, so I still haven't had much time for actually doing any modelling! Various other distractions, including small children and their usual tendency to pick up any bug going, and the usual pre-Christmas nonsense (why do we spend weeks preparing for one day?), have got in the way. However I do have a few projects lined up for the new year.

Meanwhile I thought I'd show some photos of some friends' work-in-progress, which have inspired me. Mark Holland is building a model of Welshpool, he showed this at the Haywards Heath club show back in March, at that point he had only just got the station and yards to a reasonably complete state. However at a recent club-night he brought along the next board which contains the line winding through the streets and back-yards of the town. Now Mark calls the layout "Spirit of Welshpool" as he does not claim it to be an accurate representation - indeed a lot of selective compression has taken place and a few landmarks have moved! - but nonetheless comparing the under-construction town scene with old photos in books it is instantly recognisable. Bear in mind that this is only Mark's second model railway layout, to embark upon such a model is quite a feat! 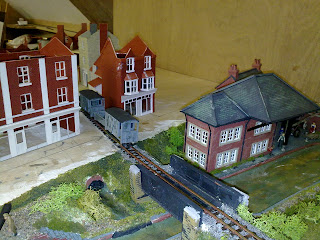 This is where the line crosses the canal, and then Church Street, and dives between the shops. These have lighting and will be fitted out. The canal wharf has been "moved" to add interest to the scene. 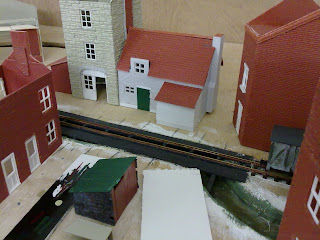 Behind the houses and shops, the line ran over a stream - and along it! - on a strange bridge-over-culvert arrangement. When complete there will be railings, washing hanging out ... 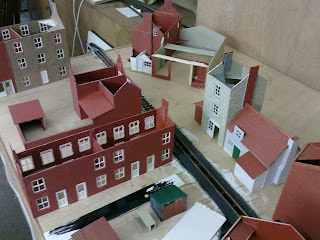 In the background is the garage, where cars always seemed to be parked inches from the loading gauge of the passing trains! The church would be to the right. Mark has based the buildings on old and modern photos of the area, although they are not accurate representations and many are missing, it really captures the atmosphere already. There's a lot of work left to do though! 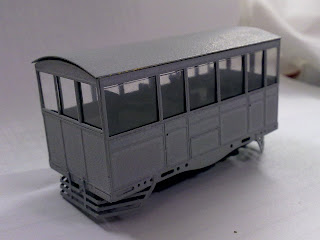 Finally, here is another work-in-progress, my friend Rob is building this model of a Darjeeling railcar using a Worsley Works kit on a Kato chassis. It has now been primed, and I can't wait to see his painting skills again. This model interests me as I have something similar waiting on my workbench ...
Incidentally, these photos were all taken with my latest mobile phone. Normal room lighting and no tripod. It's amazing what they will do these days, I don't think I could have got better photos with my "proper" camera!

Posted by Michael Campbell at 22:33

I remember seeing you photos of the yard section of "Spirit of Welshpool", and wondered how much of the town would be modelled.