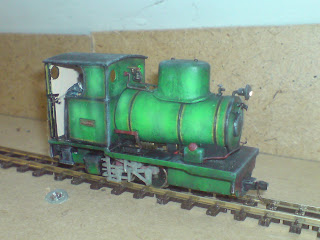 No, this isn't my work! Last Friday I made it to a Sussex Downs 009 Group club night, where my friend Rob Kaczmarczyk was showing off (and test-running) his latest work. It's a model of a fireless loco, if you are not familiar with them (they were pretty rare) they had a large tank of high-pressure steam which was charged from a fixed supply (e.g. a factory boiler), allowing it to run for several hours. The lack of fire meant no smoke or sparks, useful for working into buildings and not setting fire to things!
This model is of a loco that worked the Bowaters Paper Railway, now known as the Sittingbourne and Kemsley Light Railway and has a preservation society. Rob is keen to build a model based on this system when it was still industrial, and capture the run-down atmosphere. Like me he is limited by family and work commitments right now, but we were chatting about possible micro-layouts in the meantime!
As you can see from this model Rob has a gift for painting and weathering, which I can only admire! The model was not fully assembled after painting (so if the cab and hand-rails look wonky that's why), and these photo's were taken on my phone so are pretty poor (the green is not quite that lurid in reality!), but even so Rob's skill at capturing that dirty, workaday, wiped-with-an-oily-rag look can be seen. I should also point out that Rob has done a lot of work to the original kit to achieve the detailed model seen here. 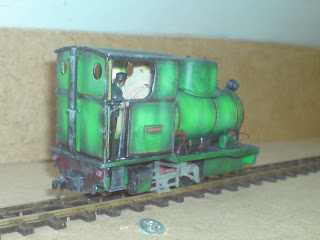 Next time I need a model loco painting I think I'll be talking nicely to Rob!

Posted by Michael Campbell at 13:43

Yes the green is a bit bright. The SDG were always a source of inspiration when I used to go some 15 years ago. Nothing changes.

This guy's work is fantastic if this is anything to go by! I love that "lightly distressed" look...probably reminds me of what I see in the mirror every morning! Seriously though, I look forward to seeing more from the talented airbrush of Mr Kaczmarczyk!